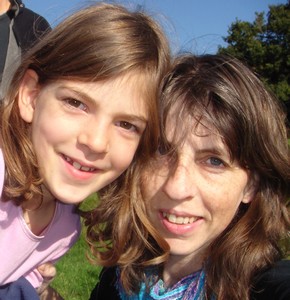 Welcome to the March Carnival of Natural Parenting: Vintage green!

This post was written for inclusion in the monthly Carnival of Natural Parenting hosted by Code Name: Mama and Hobo Mama. This month we’re writing about being green — both how green we were when we were young and how green our kids are today. Please read to the end to find a list of links to the other carnival participants.

Like a good vintage wine, I like to think I’m improving with age! I’m certainly improving with my eco credentials. Day by day I become more aware of the impact my actions have on the environment, my health and on others.

For this month’s Natural Parenting carnival, Dionna and Lauren want to know what sorts of ‘green’ things we did as a kid that we now do with our own kids.

Interestingly I would never have said my childhood was ‘green’, but then I wonder how much of our childhood simply ‘is’. It’s not until we grow older we realise that there are many lifestyles, many choices and everyone has their own unique way of living. I think as a child you assume that every one lives like you do.

So although not ‘green’ there were lots of aspects of my childhood that were green; they were just ‘normal’ behaviours for us and it’s been fascinating to take this time to reflect.

The prime example is that I spent a lot of my free time outdoors. Ok, I watched a little TV; I had a few favourite programmes – benign stuff such as Mr Benn, Bagpuss and Rainbow and then the TV went off. I would be on my bike, on roller skates, playing hide and seek, playing catch, tennis and occasionally climbing trees. Even when I created dens (a secret hiding place for our friends across the pond!), pretending I was acting in ‘Fame’ or played Mummies and Daddys I was outdoors with friends. I remember being called in for tea and for bed and that was about it!

According to a survey by the National Trust,  just 53 per cent of 10- to 12-year-olds were able to identify an oak leaf, while half could not tell the difference between a bee and a wasp.  Yet nine out of ten children were able to correctly name Doctor Who’s Dalek enemies, and a similar number were able to identify Star Wars’ Jedi Grand Master Yoda.

Talking of dens; making things from existing ‘stuff’ was my domain! I would create elaborate displays of goodness knows what, dolls houses, farms and I even made a hamster and a hamster cage from cardboard and shredded toilet paper. Man I loved that hamster! I don’t remember having lots of toys (every child is deprived compared to their friends, right?!), but I had a lot of imagination. Our toys were built to last and my daughter is currently playing with some of them, unlike her stuff which breaks in a few minutes.

I walked everywhere or rode my bike. We only had one car when I was young, so we never expected to jump in the car for a one mile journey like people do now. I walked to school with a friend and if I wanted to go to town, I would either catch the bus or walk in. Our holidays were spent exploring coastal paths or playing football on the beach; no being entertained in theme parks or lying in the sun all day!

I remember many of things my Dad did – I can still see him now peeling his vegetables into a yellow bowl with holes in. He’d fill it up, strain off the muddy water and throw the peelings into the compost heap. When he met us at the supermarket for our weekly shop, he would arrive with three large boxes in his hands for packing up our goods (the very boxes that I used to make dens, no less). We didn’t use carrier bags; I don’t even remember them being around. I also remember wine bottles on the kitchen work surface ready to be recycled at the local bottle bank. My Dad cycled to work so my Mum could have the car (she worked the other side of the county at one point) and he grew some of our vegetables in a plot of land an elderly lady could no longer manage. He was doing ‘landshare‘ before it even existed!

What I find fascinating about having my own daughter is the number of things we do that are completely ‘normal’ to her. We are avid recyclers; producing virtually no landfill waste. We support organic and fair trade farming and she wouldn’t dream of anything other than donating her unwanted clothes and toys to a charity shop. She is an outdoor girl at heart; really desperate for the snow to disappear and waiting to see the sun in the sky again! She doesn’t watch TV, hates the computer and would rather read a book or write her own stories.

Oh, and give her a box and she’ll create elaborate dens!

Visit Code Name: Mama and Hobo Mama to find out how you can participate in the next Carnival of Natural Parenting!

Please take time to read the submissions by the other carnival participants.

(This list will be updated March 9 with all the carnival links.)