Warning: Could your TV be ruining your health? 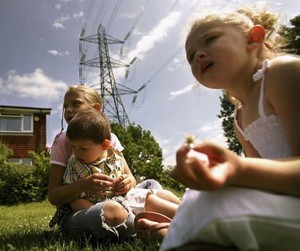 Electromagnetic fields represent one of the most common and fastest growing environmental influences, about which anxiety and speculation are spreading. We are all exposed to varying degrees of EMF in our daily lives, and the levels will continue to increase as technology advances.

Particularly high electrical fields are given off by those appliances which are not earthed (i.e. they have only a neutral (blue) and a live (brown) wire).

In his speech to the Natural Resources Committee of the Nebraska State Legislature, award-winning author, Paul Brodeur said,

“a majority of the medical and scientific studies published in the peer reviewed medical literature show that children living in homes near high voltage or high current power lines, as well as workers exposed to power-frequency electromagnetic fields on the job, are developing cancer at significantly higher rates than children and workers who are not exposed or who are less exposed.”

” most of the so called “negative” studies that have been cited by previous witnesses and by electric utility officials as finding no cancer hazard associated with electromagnetic fields are not, in fact, peer reviewed studies of cancer in human beings. Most of these negative studies do not contain any original data, nor have they been subjected to peer review. Most of them simply contain the undocumented opinions and assertions of members of ad-hoc committees, who are often paid consultants of the electric utility industry.”

Full transcript of Mr.Brodeur’s speech can be found here.

“Laboratory experiments have provided no good evidence that extremely low frequency electromagnetic fields are capable of producing cancer, nor do human epidemiological studies suggest that they cause cancer in general. There is, however, some epidemiological evidence that prolonged exposure to higher levels of power frequency magnetic fields is associated with a small risk of leukaemia in children. In practice, such levels of exposure are seldom encountered by the general public in the UK. In the absence of clear evidence of a carcinogenic effect in adults, or of a plausible explanation from experiments on animals or isolated cells, the epidemiological evidence is currently not strong enough to justify a firm conclusion that such fields cause leukemia in children. Unless, however, further research indicates that the finding is due to chance or some currently unrecognised artefact, the possibility remains that intense and prolonged exposures to magnetic fields can increase the risk of leukemia in children.”

A full transcript of their findings can be read here.

In a draft report issued in March 1990, the EPA recommended that EMFs be classified as a Class B carcinogen — -a “probable human carcinogen” and joined the ranks of formaldehyde, DDT, dioxins and PCBs.

After the EPA draft report was released, utility, military and computer lobbyists came down hard on the EPA. The EPA’s final revision did NOT classify EMFs as a Class B carcinogen Rather, the following explanation was added:

“At this time such a characterization regarding the link between cancer and exposure to EMFs is not appropriate because the basic nature of the interaction between EMFs and biological processes leading to cancer is not understood.”

Curiously, this rather unusual logic appears on the same page as the following: “In conclusion, several studies showing leukemia, Lymphoma and cancer of the nervous system in children exposed to supported by similar findings in adults in several/ occupational studies also involving electrical power frequency exposures, show a consistent pattern of response that suggest a causal link. ”

When questioned about the contradictory nature of these statements, the EPA responded that it was “not appropriate” to use the probable carcinogen label until it could demonstrate how EMFs caused cancer and exactly how much EMF is harmful.

This explanation does not satisfy many critics who claim that the EPAs upper management was influenced by political and economic considerations exerted by utility, computer and military lobbyists.

So, I could write several pages of regurgitated ‘evidence’ backed by scientific reports, but, depending on who is financing the studies and where I go for my literature, we’re not going to get a definitive answer.
The purpose of this short article then is not to convince you one way or another about the potential dangers of EMFs, but to offer practical and helpful suggestions to help minimise your exposure to EMFs at home, if they are of concern to you.

The following first appeared in “Natural Health and Beauty” magazine, October 2005. I have expanded on it for the site, as I had limited space for the magazine article.

Next time, I’ll share 12 tips for ‘prudent avoidance’ of EMFs.