The growing importance of Wind Power in the UK

March 8, 2017 | Mrs Green | Comments Off on The growing importance of Wind Power in the UK | Energy saving 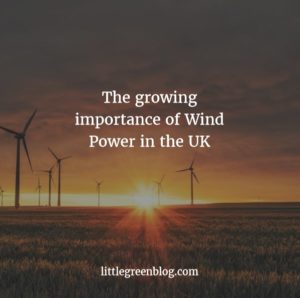 For hundreds of years, we have made use of wind power. A common image that comes to mind is the classic Dutch windmill in Holland.

Nowadays, wind power is becoming more important, widely used and with some modern updates. For example, there is now the ultra-modern windmill update- the wind turbine. Wind turbines harness the wind’s energy to generate electricity. Mounted on a tower that stands aboveground at about 30 meters, the wind turbine is extremely effective as the wind is faster and less turbulent the higher up it stands. With the turning of propeller-like blades, the generator is spun to create electricity.

There are many positive environmental impacts of wind power. For example, it does not produce atmospheric emissions or pollute the air. The long-term benefits for people worldwide and our environment are much greater with this clean energy source than other options, such as coal. Another hugely important aspect is that wind power is actually a method of solar energy, so it will not run out as long as there is sunlight and wind in our world. It is extremely significant that we have an option for energy that is inexhaustible.

In the UK, there is certainly an increasing importance of wind power. Dong Energy, the UK’s largest wind farm operator, has recognized this and even confirmed plans to sell its oil and gas division. The price of wind power is decreasing very fast

Chief Executive Officer Henrik Poulsen has said, “When you look back in 10 years from now, we’ll see this period around 2016-17 as an inflection point. The cost of offshore wind, also solar and onshore wind, is coming down at such speed that nobody could have predicted.” With electronics companies such as ABB quickly catching on to the growing importance of this clean energy source, wind turbine manufacturers are able to use standardised designs, meaning the price of producing wind power is going down, whilst the reliability of wind turbines is increasing.

In addition, wind power provides many job opportunities to those living in the UK. The Secretary of State for Business, Energy and Industrial Strategy, Greg Clark, said, “The UK is the world leader in offshore wind and it’s important that we make the most of the many jobs and business opportunities that arise from this growing industry. We’re making £730m available for renewable electricity generation this parliament, sending a clear signal that the UK is open for business as we build a strong supply chain here.”

As well as the creation of jobs, wind power is having an extremely positive impact on the UK economy. The Government’s Renewable Energy Roadmap projects great use of solar wind and according to a study by the consultancy BiGGAR Economics, if it is deployed as this roadmap suggests, by 2020 about 11,600 jobs would be supported and the economy could benefit by £780m.

Overall, use this great, greener option for the UK and the world will only grow to become more significant. Our people and our environment will see major differences as we continue to integrate this cleaner energy source.