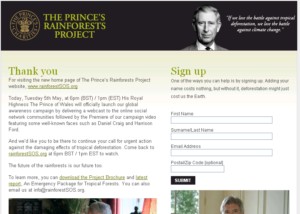 In just an hours time (Tuesday 5th May, at 6pm (BST) / 1pm (EST)), His Royal Highness The Prince of Wales will officially launch a global awareness campaign by delivering a webcast to the online social network communities followed by the Premiere of a campaign video.

The purpose of the campaign is to create a climate of awareness and public concern that encourages action to end tropical deforestation. By signing up on the Rainforest SOS website,  you’ll be demonstrating your support for urgent action.

In his webcast, to be broadcast online before the showing of the film, The Prince of Wales says: “Our aim, with your help, is to build an online community to call, from the bottom up, for urgent action to protect the Rainforests, without which we will most certainly lose the battle against catastrophic climate change.

“One of the internet’s strengths is that it can enable diverse communities to come together to ensure that everybody’s views and actions can really be made to count. It provides the potential to create global determination for change on a vitally important issue.”

I’ll be tuning in – what about you? Is the battle already lost or is there still time for positive action?