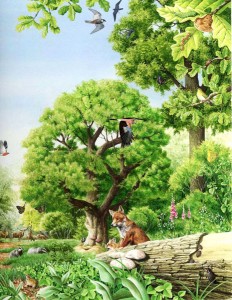 “Help save badger wood” is an interactive experience in which children gather evidence and opinions from the residents of a wood threatened by local development. Comparing the values of conservation with the advantages of the development for the local community provided a lot of thought provoking discussion which continued through our meal and way past bedtime.

Little Miss Green hates the computer with a passion, but we did manage to sustain some interest for a while with this programme! You go through a series of screens, learning about the ancient woodland and the plans to build a new bypass through the woods. The child can ‘interview’ residents of the wood such as a red squirrel, a toad, an oak tree and some children from the local school to hear their views on the proposal.

After that she wrote a letter to the council stating her reasons why she did not want the bypass to be built. The children are encouraged to write in persuasive language, which was really interesting to discuss. There is also a debate sheet which encourages them to be balanced in their view. I have to admit I had to really use my imagination to think of any ‘for’ points, but we did come up with quite a few if we imagined we were local business people. We pretended we were sitting around a table at a local meeting and had to come up with equal points for and against the development.

Little Miss green also produced her own front page newspaper article about the plans, including an interview with an oak tree! The templates are pre-loaded on the nature detectives site and I was a bit disappointed to see many of the paragraphs were loaded in too, but LMG chose to write the final paragraph herself – pretty good for a kid who hates the keyboard! I guess pre loading paragraphs means the game can appeal to a wider age range.

All in all it was a great resource. It provided some interesting discussion, widened LMGs vocabulary and we learned a lot about the idea of building roads through areas of ancient interest. There were many things I’d not thought of and when LMG looked up from writing and said “This is school work isn’t it!?” with a grin on her face, rapidly followed by “I didn’t realise this was school work!” I knew we had found something that really resonated with her natural interests and desire to learn.

Nature Detectives is part of the Woodland Trust and they continually provide some great ideas. It’s worth every penny of the £12 yearly fee and can be adapted for pre school upwards.

What about you? Do you use nature detectives, or do you have any other fantastic home education resources to share?