Instant manifestation and saving rubbish from the landfill

May 6, 2008 | Mrs Green | Comments Off on Instant manifestation and saving rubbish from the landfill | Family & Food 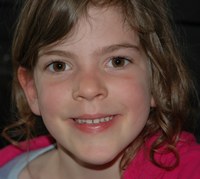 Yesterday afternoon Little Miss Green came to see me with a grin so huge I felt her cheeks would burst. Her eyes were sparkling and she just couldn’t control her absolute joy as it seeped out of her body.

I had no idea what was going on, but was beckoned downstairs with a great flourish of her artistic hand.

I was shown an old, falling apart, dirty, ‘Barbie’ (well yeah, we have a thing about Barbie too, but not if it’s a gift) dolls pushchair parked pride of place in the hall.

My beautiful girl couldn’t contain her excitement. She had visited one of our neighbours and spotted this buggy in a pile of rubbish. Like mother, like daughter, she asked if it was destined for the landfill (it was) and could please she have it.

Little Miss Green apparently asked what was wrong with it (it had a rip in the fabric) and wheeled it home with a spring in her step and a song in her heart.

We went for a walk to the church to take it for a test drive and it performed beautifully. It had a hood, and, as we were caught in a wonderful April shower, complete with rainbow, the excitement was tenfold. It’s even one of those modern three-wheel jogger styles!

I love how such joy and excitement was bought into our household by someone else’s ‘rubbish’.

I love even more a great story about the power of intent and Universal energy behind this.

You see, on Saturday, Little Miss Green decided she wanted to save up for something. 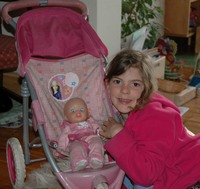 A few months ago we saw a beautiful wooden and whicker dolls pram in a local Camphill shop. It was a work of art, hand crafted and out of my price range at the time.

I also admit to having a great reluctance when she asked me. Past experience shows me that Little Miss Green is an entrepreneur with Spirit. She’s creative, imaginative, a builder, an architect and a designer. I’ve lost count of the number of things that have been broken through ‘improper use’. Dining chairs have fallen apart because they have been turned upside down for houses and dens. Drawers have disintegrated because they have been used for doll’s beds. Shelves have broken in two after being used for building projects or from being sat on. Her bed is in pieces because most of the time it’s being used for everything but sleeping in.

It’s been a steep learning curve. We’re very much a reverent family – Mr Green and I take good care of our things. We repair them instead of dumping them. We ‘make do and mend’ with virtually everything. So to birth this dynamic, passionate, firey being into our lives has been quite a shock to the system at times.

I said No to the pram, because I couldn’t bear the thought of it ending up ruined in a few months time after Little Miss Green had created a climbing frame out of it, or similar. (And it really is no good telling her not to. If you’re a creative type, you’ll understand why………).

So anyway, she decided she wanted to save up for this pram. This was a new venture in itself. You see, quite unlike us, money burns holes in Little miss Green’s pockets. She just can’t hang onto it. She can’t wait to spend it. It gets frittered away on crap. But you can’t expect a child to learn unless you allow them experiences to learn from………. 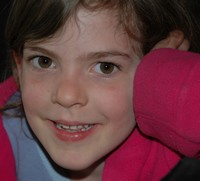 She announced that buying chocolate, crisps or cheap toys only gave her pleasure for a few moments and now she was ready to save for something she really wanted.

With a deep breath, and a leap of faith I told her we would support that. I emptied my purse of change, Mr Green gave her 50p and she spent the afternoon admiring her loot. A whole pound!

She asked how long it would take. We reckoned she might have enough by Christmas time, just to test the water, and that was met with her seal of approval.

So, there she is, with her faith and trust intact believing, *knowing* that this pram is coming into her life.

She drew the ‘wish’ card in her angel deck last night and the pram came up again. All day long she has talked about it. This afternoon we were under a rainbow and she wished up on it. She has visualised the pram, looked at pictures of it, told us how she is going to take care of it, told us where it will live and what happens?

Within 2 days she has manifested one…….

Ok, it’s not the pram, but it’s a pretty neat case of ‘instant manifestation’ if you ask me and she loves it, which is the main thing.
Don’t you love how the Universe responds when you have faith?