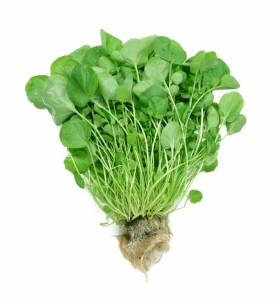 Mr Green is going to be more than happy! Watercress is one of his favourite foods. While everyone else has a tiny garnish as part of a meal, Mr Green eats half a bag of it as the main part of his.

Watercress is the UK’s most historic salad leaf and this year, it’s the 7th annual Watercress festival. Around 400 BC on the Island of Kos, Hippocrates, the father of medicine, is said to have located his first hospital beside a stream so that he could grow a plentiful supply of watercress to help treat his patients.

The majority of watercress in the UK is grown in Alresford, Hampshire. During watercress week, Hampshire Farmers’ Market will showcase the best of local produce with some producers highlighting the versatility of the crop with watercress scones, watercress pesto and watercress chocolates being just a few of the watercress products on offer at this watercress festival.

If you’re feeling daring, the “World Watercress Eating Championships” give you the opportunity to eat 2 bags of watercress in the fastest time! Perhaps I’ll send Mr Green along to pitch himself against the rest.

Did you know watercress is one of the finest superfoods? It is packed with iron, zinc and Vitamin A for healthy skin, hair and nails and to protect the eyes. It contains vitamin B6, C and E to support a healthy immune system and more than 15 essential vitamins and minerals to keep you in top health. Research is also highlighting its role in the fight against cancer.

You can use watercress in place of lettuce for salads, blitz it into pasta sauces, briefly stir fry it, make delicious soup, mash it into potatoes or if you’re brave, you can add it to a juice or smoothie for an instant health hit. Check out the Watercress recipes section for more ideas.

What about you – do you like watercress? Tell me your favourite way to eat your ‘bit on the side’.