How to chit seed potatoes

February 18, 2011 | Mrs Green | Comments Off on How to chit seed potatoes | Gardening and pest control, video 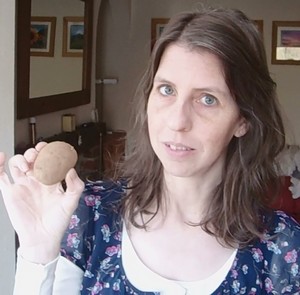 You’ve probably heard the term ‘chitting’ when it comes to planting seed potatoes but do you know what chitting potatoes means or how to do it?

Do you need to chit? Will your crop fail if you don’t? Do you need any special chitting equipment?

This short video will talk you through the what, where, why, how and when of potato chitting. But if you prefer text, it’s all written below!

What is potato chitting?

Potato chitting, simply means ‘to sprout’. In other words, you want to encourage the potato to sprout before planting. If you’ve ever left a potato in the bottom of a bag or box by mistake, you’ll know that a potato loves nothing more than to sprout!

Why should I chit potatoes?

Whether or not you should chit is personal choice. Some people swear by it and would consider themselves a failure if they didn’t chit. Other people say it is unnecessary and don’t bother…

The theory goes that chitted potatoes grow faster, resulting in an earlier crop. Some people reckon yields are bigger and the crop is better because the energy goes into making tubers rather than growing the plant.

When should I chit potatoes?

Chitting takes around 4-6 weeks. If you are planning on planting first earlies mid March, you need to chit at the beginning of February. For second earlies (planted late March / early April) you need to start chitting mid February. Maincrop potatoes don’t need chitting.

How do I chit potatoes?

Chitting potatoes is simple and the best piece of ‘equipment’ is old egg boxes! All you need to do is put one seed potato, crown upwards, per egg space. The crown is the end which is rounder and blunter and contains the eyes.

Where do I chit potatoes?

To chit potatoes, they need to be kept in a cool, light place such as the windowsill of spare bedroom, or green house. At the end of the chitting process you should have 1/2 – 1 inch long dark purple shoots (this is the opposite to the long, white straggly shoots you get if you leave a potato in a dark place by accident!)

What about you – do you think chitting is necessary or not?