What is white light?

One main criticism of LEDs used for room and space lighting is that the colour or hue of the light appears cold and harsh. Some LEDs appear as tiny, brilliant lights that are too bright to look at, but seem to give very little illumination. There is a quantitative measure of the ability of a light source to reproduce the colors of various objects faithfully in comparison with an ideal or natural light source called Colour rendering index, or  CRI. We are used to a much warmer light from conventional incandescent lights because filament bulbs have a broader spectrum of light that is biased towards the warm red frequency.

White light is made up of all colours, which is why we see colours of objects evenly when lit by a balanced white light. If we reduce the output of any colour in a white light source, we reduce the reflective strength of that colour in objects. For example if we look at a ripe tomato under a blue light, we don’t see its red colour, because there is no red light available to reflect off it and onto our eyes. The ability to render colours fully and accurately is one major drawback with LED lighting that has not been desiged correctly.

Color “Temperature” is a measure of the relative amounts of red or blue light being emitted.  It is not a measure of temperature at all. Most commercially available LEDs aim to provide the highest luminous efficacy, meaning the brightest light output in Lumens for a standard of one watt of electricity used. These high powered LEDs use InGaN, GaN (gallium nitride) in the emitter and tend to produce the highest light output. The problem is there is a dominance of blue in the light, peaking at about 465nm and less of the red light that gives the impression of warmth. In order to correct this, the favoured method is to coat the InGaN emitter with phosphor of different colors, the phosphor absorbs the light energy and emits a more balanced output with a wider spectrum to produce white light.  A fraction of the blue light undergoes the stokes fluorescence being transformed from shorter wavelengths to longer (500–700 nm.). Depending on the colour of the original LED, phosphors of different colours can be used. If several phosphor layers of distinct colors are applied, the emitted spectrum is broadened, effectively increasing the color rendering index (CRI) value of a given LED.  These LEDs are called phosphor based white LEDs.

The warmer the Light, the lower the lumens/watt 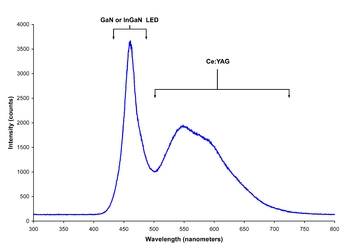 Unfortunately, the warmer light output of phosphor based LEDs is considerably lower in lumens than the uncorrected versions and  this is an area of development still requiring more research. This means Warm white LEDs produce lower lumens (light brightness) than daylight or natural white LEDs

See
http://en.wikipedia.org/wiki/Light-emitting_diode for an indepth article on this and better image.

Another method  to improve white light quality is to use LEDs with 3 distinct RGB emitters that can be individually tuned to output the desired mix of light giving a broad spectrum of colours and hues. Using the principle that all visible colours are made up of a balance of Red, Green and Blue primary colours. These LEDs require a control circuit to adjust the different mix of outputs and are less practical as direct replacement of conventional lighting. However, there are some RGB LEDs that come with a remote control pad that allows you to select any colour you want, rotate sequences and produce white of any hue, warm, neutral, daylight, or very intense. 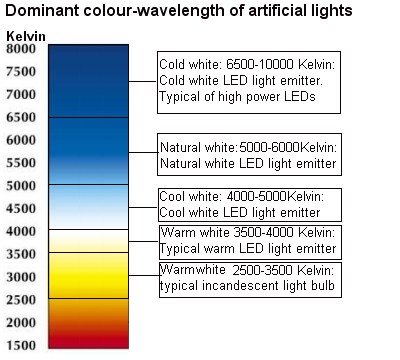 For the DIY LED enthusiast, there is another definitive guide that helps greatly in deciding the colour quality of the LED. Quality manufacturers such as SMD, Cree, Seol, Philips and Nichia provide detailed specification data sheet for their LED emitters. Along with technical details of forward voltage and current requirements, these manufacturers will also show a codes relating to a particular LED range and its colour output based on the CRI or colour rendering index, as discussed earlier. Put simply, this labelling follows a prescribed measurement of what sort of white the output is, taking into account, the dominant wavelength and scope of the total output. This means you can buy a LED emitter and choose a binning code that gives you cold white, daylight white, natural white, warm white, or some other description. What is important for the user is to understand the actual colour temperature in Kelvin according to the table below. When a white LED is described in this way what it means is that it will have a dominant tint or hue to the light ranging from red to the blue end of the spectrum. This gives the subjective feeling of warmth or coolness.

For a more detailed insight to Binning and labeling, please see a typical data sheet from Cree here
http://www.cree.com/products/pdf/XLamp7090XR-E_B&L.pdf

LED technology is improving all the time. Efficient production methods, higher light output and better colour quality is emerging making LED lighting more attractive for manufacturers, home users and lighting contractors.  There is a technology lag between what is available from the cutting edge of development and what we can buy in the high streets. Most commercially available LED lights are either Just about bright enough to replace a halogen, but too blue, or hardly better than a flashlight if it has a broader and warmer colour spectrum.
Rule of thumb for white light: The warmer the white, the lower the light output, in terms of lumens per watt
A 500 lumen warm LED light will need to be more powerful, in terms of watts that a cold light version.
There is no doubt that LEDs will lead the green lighting revolution, but right now, there are too few commercially available lights to really impress the skeptics or ordinary consumer. Some manufacturers and retailers are releasing a new breed of LEDs that give both high light output and good colour quality The DIY hobbyist, however, has access to build LED light units that really fulfill all the criteria of brightness, colour quality, energy efficiency and cost.