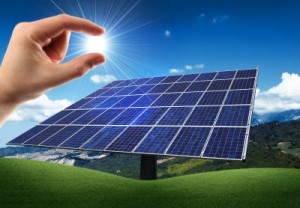 Over the latter half of the 20th century, scientists began to understand more and more about the dangers associated with fossil fuels.

Not only does burning fossil fuels such as oil and coal release harmful pollutants into the atmosphere, it means that large parts of our society are dependent on a resource that will not always be available.

The world’s supply of oil and coal is large, but it is finite. Decreasing supply could combine with increasing demand to create serious economic and political instability.

By contrast to fossil fuels, renewable energy sources draw their power from resources that can virtually never be depleted. There are many different types of alternative energy technologies, some of which are common but others of which are still rare or experimental.

If woodland resources are managed correctly, they can be a renewable resource; managed woodland can provide fuel for home heating. When most of us talk about renewable energy, however, we mean renewable forms of electricity generation. Of these, by far the most common is hydroelectric power.

Hydroelectric dams use water pressure to turn large turbines. Water builds up behind the dam and flows out through a narrow turbine channel. The spinning turbine produces electricity.

Hydroelectric dams produce large amounts of electricity at a predictable rate, but they also have some disadvantages. Constructing dams is time-consuming and expensive. It also requires significant alteration of landscapes and waterways.

Wind power is another form of renewable energy which uses a natural force to generate electricity via a rotating turbine. Wind turbines, organised into large groups called wind farms, are placed in areas of high wind speed to generate energy.

They require much less expense than hydroelectric dams and are less harmful to the landscape, but their electricity generation is much less consistent. A lack of wind, or a wind speed beyond the turbine’s safe tolerance, can mean that the turbine stands idle.

Solar power generation uses large panels of photovoltaic cells to transform the sun’s energy into usable electricity. Solar panels are a very versatile form of power source; they can be deployed in large banks to generate power for a city, but they can also be placed on a roof to provide electricity for the building itself.

Excess power generated by rooftop solar panels can also be fed into the grid if it exceeds the amount needed by the building. Like wind power, solar power can be unpredictable; it relies on good weather and works best in areas with high levels of sunshine year-round.

Biofuel is a substitute for fossil fuel; a variety of different crop types can create biofuel. Biofuels could be a useful replacement for fossil fuel, but the necessary crops require large areas to grow, meaning that some environmental activists are concerned that they could threaten food security by taking space needed for food crops.

Geothermal power stations function by transforming heat into electricity. These generators are found in areas near the edges of tectonic plates, such as Iceland, where geothermal power accounts for nearly a third of the nation’s electricity generation. The deep drilling necessary to access heat beneath the earth’s surface in other areas is currently prohibitively expensive.

These and a number of other less common types of renewable energy generation are environmentally-friendly alternatives to fossil fuel power generation. Although most of them are still comparatively rare, their role in energy production is rising and will only become more and more important as avoiding the harmful effects of fossil fuels becomes more and more critical.