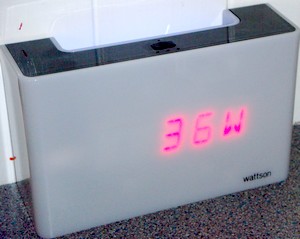 For the past 18 months I’ve been taking a close look at our electricity consumption and been totally stumped on how to reduce it further.

It got to the stage where I was taking daily readings in a desperate search for patterns and ‘vampires’ I could point our consumption to.

We don’t have gas, so everything is powered by electricity. However, we heat the home by wood.

For three of us, all at home all day, our average daily electricity usage was 17 kilowatts per day. Naturally, as we use wood to heat our home, that was virtually constant, regardless of time of year.

We put in CFLs, we don’t have tumble dryer, I have A rated hob, oven, washing machine and refrigeration and we didn’t leave too many things on standby.

I thought 17 units was a lot of electricity for a day when you consider our neighbour leaves a 500 watt halogen security light on all night! I’d hate to be paying his bill.

With a mud magnet for a child we used to have the immersion tank on for an hour a day so that hot water was literally en tap. We’d boost that for an hour at a time if the water needed a top up and I think I got a bit trigger happy at times.

Anyway, during September, I reached the conclusion that an immersion tank was surely one of the most state-of-the-ark ways of heating water and it must be this that was running away with our electricity.

The fabulous people at DIY Kyoto, sent us a Wattson monitor to help us figure things out. In addition, we got hold of an old shower and I persuaded Mr Green to rig it up in the kitchen as a ‘tankless water heater’. As we were moving in to autumn, we could use the wood burner to heat the water for the bathroom. You’ll also be aware from previous posts on the site that Mr green switched our CFLs to LEDs.

Fast forward a few weeks and our daily reading is now around 9 kwhs! Using a tankless water heater immediately saved us at least 3 kwhs per day; sometimes more if I boosted it. But what has reduced our reading even more is the awareness this one change had given us.

Once we saw what we could reduce through water heating and looked at those KWs piling up with the wattson meter I looked at my other habits. One of them, and I cringe as I write this, is that I would cook porridge on a low heat for over an hour in the mornings! Now I’ve started to cook it for 5 minutes and you know what? It tastes just as good. I thought longer and slower meant more creamy porridge – not so.

I’ve also started taking much more care about batch cooking. The other week when the oven was hot from a Sunday dinner I put a tray in there with some chopped onions and butter. I make soups, casseroles and curries throughout the week which require frying onions first. In the residual heat of the oven, these onions softened and I popped them in the fridge ready to use up throughout the week.

Also, I’ve been cooking extra vegetables. I make enough for 3 meals, which means the veggies are already cooked, ready to be added to soup during the week.

Next up are the standby lights – they are now all off and I’m warming water on the wood burner to use in the kettle for drinks throughout the day – this dramatically reduces the amount of time it takes the water to come to the boil.

Back in February last year we used 524 kwh of electricity in the home. For the past month, we’ve used 291.

Yesterday, we called our energy supplier and switched tariffs and reduced our monthly Direct Debit and at this rate I feel I will soon be ready to move to a green energy supplier. I’ve put it off because I’ve not yet found one that is as cheap as the rates we have now, but my conscience really wants to support a green company!

The Wattson claims you can reduce your bill by up to 25% and I couldn’t agree more. It gives a constant reading of the electricity you are using and when someone is running a shower, the kettle is on and you fire up the oven it’s incredible to see just how much juice you’re getting through.

Likewise you can spot those ‘energy vampires’ a mile off. From the picture, you’ll see the reading of 36watts. Well we went all around the house trying to find those damn watts! We turned off the refrigeration, the cooker lights, all the things we could think of and we were still using 36 watts.

In the end we discovered a stereo on standby, Mr Green had a drill permanently on charge in the garage and we had a weather station and dect phones plugged in. Once we turned all of those off, the meter registered a satisfying zero. I figured out that all these tiny things were adding up to around £40 per year of electricity.