At last I have found a voice of reason amidst the madness of Western Life. I’m in love with George Monbiot after reading just the introduction to his book ‘Heat’. In his book, Monbiot seeks to show how we can successfully attain a 90% cut in carbon emissions here in the UK without the need to run about in animal skins or dwell in caves.

Monbiot, by his own admission “[believes] nothing until it is demonstrated, [and junks] any technology, however pleaseing it may be, which does not work.” How I would like to invite this guy over for a cup of herbal tea……..

He speaks the words that no one else had had the courage to utter. The bottom line is, if we want to

arrest the development of Climate change we need to change. Hurrah! See, it wasn’t that bad was it?

He suggests that we need to change our lifestyle, make conscious choices, go without a few luxuries (and by God, when you think about it, the majority of us really do live a life of luxury over here on our small island) and generally start caring and acting in a more responsible way.

The ultimate in Green washing to me has to be the retailers, authors, manufacturers, magazine editors and carbon offsetting companies who claim that our lives don’t have to be any different if we do this / buy that / read

this / write to this person.

We really do want our cake and to eat it, don’t we? We’re like a bunch of spoilt kids once we have had a taste of consumerism. We don’t want to give up our convenient lifestyle, make any changes that cause a little discomfort and more worryingly, we won’t sacrifice short term comfort for long term gain. 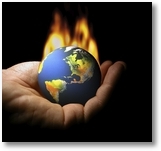 in winter), happy to buy fair trade clothes (as long as they look right), we’ll replace a few incandescent bulbs with CFLs (which is great, because now we can leave them on all the time) and we’ll buy a high mpg car (and still take a couple of long haul flights a year to sunnier climes).

We’re bought up to want and expect instant gratification. Hungry? Use a drive thru or nuke a meal in a plastic container for 3 minutes. Bored? you can surf the internet and TV 24/7 Want to talk to someone? Send them a text and if they

don’t respond in a few seconds you can call them.

Our children are educated, we have a NHS service, that, despite all the bad press, does a phenomenal job, we can choose whether to work or not, who to vote for, where to go on holiday and every gadget and toy you could imagine to fill up our leisure time with is provided in every style and colour you could want.

As Monbiot points out, 2 million years ago things were pretty different. We HAD to live in harmony with our environment and we spent our time finding food, running from predators, keeping healthy and watching the weather lest it should finish us off.

Once we learned basic agriculture and food preservation we then resorted to killing one another for land.

The we discovered fossil fuels and now, we’re killing ourselves with greed.

We’re all desperately seeking to hold onto that which we ‘own’. We’ve worked hard for it, so we deserve it…….. 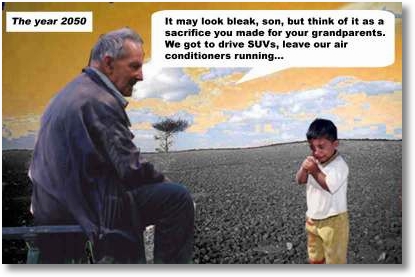 In Jamie Sams’ book ‘Earth Medicine’ she writes “The earth mother belongs to herself and has always reclaimed every part of her soil. The false sense of ownership has been defended by countless civilisations that fought over self-declared borders, killing other humans in order to possess verdant valleys or wide savannas. Mother Earth is a living organism that can never be owned by anyone.
The ages of ice have all but obliterated the ancient remains of hundreds of vanished peoples. The ice age will come again when the Wheel of Life returns. It ma not come for another thousand years, but it will happen”.

Knowing this, doesn’t it seem foolish for humankind to waste life force and resources to proclaim ownership rather than healing the separation created by fear or greed?

A recent survey by the Energy Saving Trust revealed that only 4% of people have made substantial changes to the way they live. We have access to so much information, that there is no excuse for ignorance. But what we need is ACTION. We’re a nation of talkers. If you’ve ever been in a middle management, you’ll know what I am talking about. You have meetings about when you are going to have the next meeting………

We live in constant denial and we treat the cancers of modern life at symptom level; more often than not by throwing money at it. We build more roads to cope with traffic, we offset our flights to the other side of the world, we even set up funds for victims of disasters on the other side of the world, instead of going over there and sharing our knowledge, love and muscle power.

The root causes of climate change as I see it are:

1- People don’t care. We don’t care about people on the other side of the world, or, as the native Americans put it, what the consequences of our actions will be in 7 generations time.

2- We are ignorant. Many adults don’t know the first thing about cooking, growing food or repairing things. All they know is how to earn money to pay other people to do things for them.

3- Our currency is money. According to the Stern report ‘it makes economic sense’ to do something about climate change! As Monbiot points out; what would the report have said if it *didn’t* make economic sense?

Would it have made more economic sense to allow people to die? It’s not people in the UK who will be hit the hardest by climate change, after all. It is people in the tropics. We want our fancy holidays and latest electronic gadgets and it would appear that we are prepared to take someone else’s life for it. We want biofuels at the expense of someone elses cereal crop for food and a dozen roses on valentine’s day at the expense of a farmer’s health. Have we really evolved that much since our cave dwelling days?

4- Denial. We are living in constant denial about what is happening. Maybe it’s too many action-packed films and g 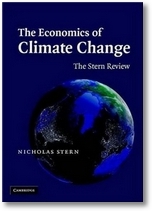 raphic pictures on the news that has desensitised us. We think we can reflect the sun back when what we need to do is reduce our consumption of fossil fuel.

5- We focus on short term comfort instead of long term gain. At the moment there is money to be made on the existing oil, we like our cars, holidays, ‘stuff’ and lifestyle. We’re comfortable and we don’t want anything changing that while everything remains in equilibrium. We do the same with our medical profession – throwing drugs at conditions which require a lifestyle overhaul.

6- Blame culture. We would rather blame someone else than take responsibility for ourselves. You cannot have a genuine car ‘accident’ anymore without being sued. Teachers won’t pick up a child to console them incase they are accused of inappropriate behaviour. If you slip in a supermarket because you’re not looking where you are going, you can make a tidy sum from the supermarket for negligence.

All the while we profess we can’t do anything about climate change while we are waiting for the Government to act because it is ‘their fault’. But as Monbiot says, the Government cannot act until we want them to and can show them we have changed.

While we are waiting for each other, waiting for our opponent to make the first move, the greatest predator of this century is closing in on us………….

Do yourself a favour, get hold of a copy of this book, read it and, most importantly, take action. Check out his website for more great reading material. 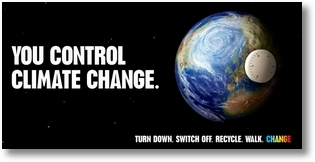