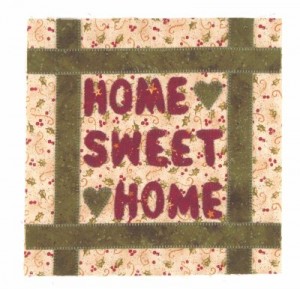 At the beginning of each year, rather than write a New Year’s Resolutions list, I write a list of goals I have for our home.

Our house is 70+ years old so regularly requires maintenance. I’ve definitely noticed over the past 10 years that the TLC our home requires is increasing.

I find making myself accountable can help with goal setting, so here’s what’s on the agenda for Chez Green this year; some of which has already been done!

I’m all for water conservation and we have four rain barrels here at home, but I’m in the unenviable position at the moment of having rain leaking through our bedroom roof. Mr Green has tried to fix it three times but each time the wind blows in a certain direction when it’s raining, water comes through the ceiling. It’s a bit of a conundrum that demands a dry, still day for him to go gallivanting on top of the house in order to try and solve the issue.

As you know we’re big fans of solar energy and use it for our downstairs lighting. One of the lights is not getting enough forward voltage which means the light doesn’t get bright enough. The resolution is to buy a voltage controller that will regulate current against voltage and give the proper drive for the LED. I’ve just checked with Mr Green and the voltage controller has been ordered so is on its way – yipee!

Our electricity usage has crept up again and a large proportion of electricity is used for heating the immersion tank. I have to admit I like having hot water, literally ‘on tap’, but the immersion is often switched on and we don’t use it. It’s very wasteful so this year Mr Green is installing a shower to reduce our electricity usage. It’s easy to get all the plumbing bits and pieces you need with online companies such as True Shopping.

I am now the proud owner of a three part composting system. All materials were reclaimed; in fact the wood was part of an old hotel that was demolished in a nearby town. Having a three part system means one section is currently being used to add composting material, another is ‘cooking’, while the third is ready for use in pots and on the garden.

Just like the compost bins, the chicken coop has been built from reclaimed materials. An old Wendy House is their coop, whilst timber from the hotel, and old fencing donated by a neighbour, has ensured this project has cost us nothing but time.

What about you – any plans for making your home more eco friendly or doing general maintenance jobs this year?