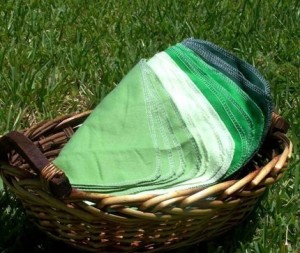 I joined in with last week’s Change the world Wednesday challenge which was to give up disposable paper kitchen towel.

You might remember me saying how difficult this would be. I know it’s much better for the environment and my bank balance, but sometimes that doesn’t matter does it? You just want the convenience of a regularly used product on hand to clear away life’s little messes.

The thing that was so annoying was that I did this once before! I totally gave up disposable paper kitchen towel for a few months and I was frustrated because I allowed my bad habit to return.

How did I get on?

On day two of the experiment the very thing happened that I keep kitchen towel in the house for! Our elderly cat, who is now incontinent left me a puddle on the floor. Ack!

I reached for the kitchen towel, but thought of my challenge and I grabbed some old cloths instead. She had peed right next to the washing machine, which was thankfully empty. So I dealt with the pee and put the cloths straight into the machine. I have to say I felt very proud of myself!

I realised throughout the week just how many kitchen towels I had been using again. But I use them for stupid things. I found myself putting one on the work surface to peel potatoes over! Say what? I went into observation mode and saw myself peeling them, then picking up the whole lot and putting it in the compost caddy. Convenient, right?

Why couldn’t I just take the lid off the caddy and peel the potatoes over it? Well I have done from that moment onwards. And if I have a lot of stuff to prepare I can put newspaper down first and put that into the compost caddy.

I found myself reaching for disposable kitchen towel on a couple of occasions after washing my hands too and I decided I could have a cloth that is just mine, but I didn’t know where to put it so I could ensure other people wouldn’t use it.

I have now thought of a place – on the inside of a cupboard that only I use in the kitchen.

I found myself reaching for disposable kitchen towel to buff the hob after cleaning, but resisted and used a dry microfiber cloth instead (the effect was just as good)

So it was an interesting and useful experiment. The secret is to observe yourself without judgment and then look at how you could change that habit. Is there something else you could use? Could you change the way you do things slightly?

I don’t think I would ever go without disposable paper kitchen towel completely but I figure that I’m good at recycling, so I need to close the loop by purchasing more recycled products. So where possible I will commit to only buying recycled kitchen towel in future. At the moment I buy FSC approved, but adding recycled content to my basket would make things better.

There is a handy guide to forest-friendly toilet paper, kitchen towels and tissues on the Green Peace site  with Marks and Spencer and Sainsburys top of the league table

I think I can reduce my usage dramatically and the key to this for me is out of sight, out of mind. If I am dealing with something and the disposable roll isn’t handy then I can usually come up with creative solution. But what I’d really love to do is dust off my sewing machine and make a pile of these gorgeous looking washable cloths from a seller on Etsy. They are truly beautiful and who could resist using one? I might even treat myself and buy some!

What about you? How did you get on with giving up kitchen towel – did you find it easy or more challenging than you anticipated?