Seriously? It’s only week 2 of my no spend month? 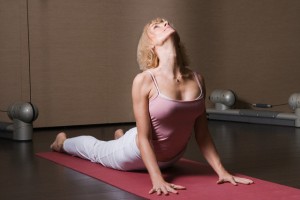 I’m on week 2 of my ‘no spend’ month and I have to confess it’s been tough.

I went into Lidls and honest to Goddess, they had two things I absolutely have wanted for about 6 months!

A yoga mat and some non slip socks.

Now I’m not as disciplined with yoga as I should be but the fact I can’t really do some of the positions without my feet slipping, unless I wear trainers (we have wooden floors), seems to be a handy excuse for not doing my practise.

But on the other hand, if I was disciplined and committed; I’d just pop my trainers on and get on with it, right? Where there’s a will and all that…

I can’t begin to tell you the weird conversations that were going on in my head – it was like having the angel on one shoulder and the devil on the other.

I talked myself round and round and then remembered that I’d got hold of some exercise equipment from Freecycle and I don’t actually use them very often. I’ve even got an electric bike that I won’t embarrass myself by admitting how often I use it.

So I left the yoga mat and the non-slip socks in the store.

I felt good about myself but a bit deflated too. I think I’m more materialistic than I realised. There must be something about coming home with something new that I secretly like. I feel a bit shallow writing that, but it’s been a great opportunity to learn a bit more about myself.

In the end this week I spent £23 on food; which sounds quite a lot now I’ve written it. It was organic vegetables, a couple of pots of yoghurt and a couple of loaves of sprouted wheat bread. The latter a NEED? Probably not but I do prioritise good food as part of our natural, holistic lifestyle. I avoided the charity shops in town because I figure that it’s not until you see something you *really* want it; it’s simple but effective psychology. I’ve cancelled email subscriptions to my favourite online clothing shops, especially as now is the time of 70% off sales. Yep, it’s all coming out now; I’m a bit of a clothes and shoes lover…

I topped up the car with fuel (£55) and paid for Little Miss Green’s kickboxing, which I’ve decided to put on the ‘necessity’ list; I believe it’s a valuable skill for life and I feel better knowing she can take care of herself should she ever be unfortunate enough to run into trouble.

Then there was another £45 because we’ve just adopted three chickens! However, the run and coop were made for zero expense because Mr Green reclaimed all the wood and nails from the garage. Plus our neighbour donated a role of chicken wire and the roofing. How neat is that! All I had to buy was the chooks, organic feed, grit, oyster shell and a drinking bottle.’ [email protected] going to learn to make my own food over the next few weeks as I don’t really want to be sucked into thinking I have to buy a ready-made mix.

Life seems really expensive when you start writing things down. I’ve spent over £100 this week and really have little to show for it.

What about you – how did you budget this week?