What I learned from a hornet 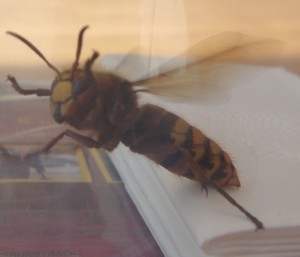 Picture the scene. You walk into your bedroom for a siesta and there on the windowsill is a hornet. The first one you’ve ever seen in your life in fact – it’s two inches long (but looks like about two feet because ya know, it’s a bit scary if truth be told).

That’s what happened to me on Earth Day.

I confess to being a complete wuss when things like wasps are involved and I go into a bit of a hysterical mess without any conscience.

Mr Green, however, is ever the true protector and he rushed to my aid.

He managed to catch the beastie underneath a cd case!

The hornet was not a happy chappy as you might imagine and was buzzing angrily whilst trying to climb up the sides of its prison.

I have to admit I did look on with marvel while we googled images to check out what it was. Yep, it was a hornet, and according to wikipedia “A hornet’s sting is painful to humans, but the sting toxicity varies greatly by hornet species. Some deliver just a typical insect sting, while others are among the most venomous known insects.”

Now here’s my confession. Who wants a hornets nest in their home or anywhere near their home?

Who wants a hornets nest when you have a child who loves to wander outside barefoot all year?

No, me either and our first instinct was to, you know, dispatch of it. It would have been quick and painless in order to assuage my guilt but we looked at one another and we knew what each was thinking.

“But it’s EARTH day!” I muttered

“It doesn’t feel right to kill it does it?” I said

I could feel Mother Nature looking on without judgment to see how her children would resolve this.

For the past few years any wasps that have come into this house have been erm, dispatched. but this year something has shifted.
Maybe it’s my increasing interest in Buddhism.
Maybe it’s because I feel more of a connection than ever before with Mother Nature.
Maybe it’s because I can see the our world is crying out for help and I don’t want to be one of the reasons it cries any more.
Maybe it’s because I know that this creature has its part to play in the ecosystem whether or not I understand it or like it and it’s not up to me to play God.
Maybe it’s that as a Mother, I know the desire to fiercely protect and love unconditionally.

So Mr Green took the hornet into the field at the back of the house. I joked that he should release it then run fast, but he came back with a smile on his face. “It flew off in the opposite direction” he said.

Later that day a wasp came into the house. I was scared for a moment and went into my usual flight or fight response, but then I simply looked at it, marveled at how it seemed to hover in the air and asked “Would you mind going outside?”

The wasp has a special way of communicating with its family and the wasp totem asks us to consider our own methods of communication.

Is there anything in your life you need to express more clearly?