Are you joining in with Demmand zero day? 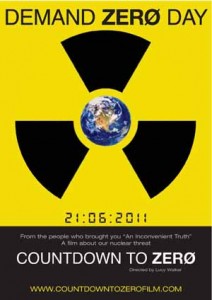 What a great way to celebrate the solstice!

I’m a great fan of DogWoof films; they are the company behind movies such as No Impact Man, Food Inc and Dirty Oil.

Tomorrow, on the longest day of the year, they have something very exciting lined up.

“Countdown to Zero“, made by the producers of An Inconvenient Truth promises to be a fascinating and frightening exploration of the dangers of nuclear weapons, exposing a variety of present day threats and featuring insights from a host of international experts and world leaders who advocate the total elimination of nuclear weapons.

The film reveals the truth behind an issue on which human survival itself hangs – the very real possibility of nuclear disaster and is a chilling wakeup call about the urgency of the nuclear threat.

The premiere will be screened simultaneously at around 70 venues across the UK and Ireland before venues link up live to BAFTA for a panel discussion with special guests Her Majesty Queen Noor of Jordan, Margaret Beckett, Lawrence Bender (Quentin Tarantino’s producer) and ex-CIA operative Valerie Plame Wilson.

Watch the trailer above then find your nearest screening. You can submit your questions in advance, to be answered on the night by the panel.

If you feel moved to act, then you can sign their petition, Cut Nukes.