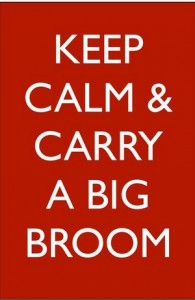 For the past few days we’ve had rioting and looting in London and other cities across the UK.

Yesterday the trouble arrived in my nearest city; just 10 miles away. Whilst not the same scale as elsewhere in the country, it was undoubtedly very disturbing for local people.

Riot police, police dogs and police helicopters were patrolling the city and eight fire units were sent to put out fires at a disused college, various stores and cars. A total of nine men, aged between 16 and 40, were arrested.

If you read national newspapers or watch the TV news, the media are having a field day. There’s no news like bad news to increase sales, fear and hysteria.

But in amongst all the mindless looting and violence there are beacons of light, love and hope as the true British Spirit shines through.

Using social media to organise their crime, the rioters executed their plan via blackberry messaging and twitter. My transformation coach frequently reminds me that everything in the Universe is perfectly balanced, and this was proved to me when the ‘clean up squads’ used the twitter hashtags #riotcleanup and #RiotWombles to co-ordinate their plan. They arrived, just hours after the devastation with brooms, bin bags and rubber gloves, but most of all with a sense of comraidship and enthusiasm to clean up the mess.

This account from a story in the Daily Mail moved me to tears:

Among those badly hit by looters was TD Sports, a small independent sports supplier which suffered £50,000 worth of losses on Monday night.
Owner Dave Cox, 50, said: ‘I felt numb when I saw the damage, I just wanted to cry. I’m far from a wealthy person, and without this shop, I will lose my livelihood, my house, everything.’

But at 10.15am yesterday, something unexpected happened. As Mr Cox surveyed the carnage, a group of volunteers arrived and offered to help him clear it up.

In less than 30 minutes the smashed glass was swept away and the shop restored to a semblance of normality.

Then with cheery waves, the helpers were gone to help the next stricken business. ‘It was fantastic, I was very emotional actually,’ said Mr Cox. ‘It proves there are still some good people around.’

In Peckham, the eyesore of a boarded up Poundland window became a tribute to the area. A4 sheets of paper with felt-tip pen letters spelled out “Why we love Peckham” with people adding their own messages on Post-It notes and coloured labels. They turned something ugly into something beautiful and creative: 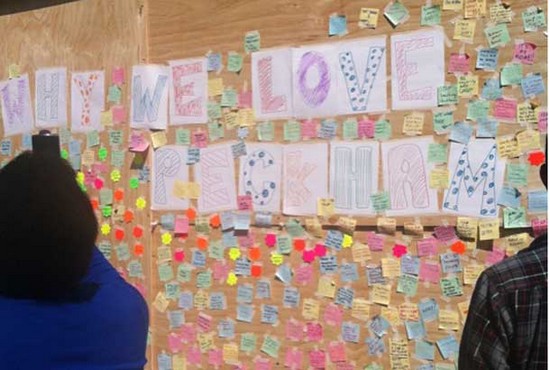 There was the story of an elderly woman, who walked with a walking stick into the middle of the riot area and stood there making an impassioned plea. She made the point that the rioters were not fighting for a cause. She said “if you’re going to fight then fight for a cause, [don’t] just go round vandalising things for the sake of it.” Her language was strong, but she was showing courage and bravery.
Finally, there was a 300-hundred strong crowd of Enfield town residents who formed a ‘vigilante’ group and took to the streets to protect their community from looters. While I don’t believe fighting violence with violence is the way forward, these people gathered together for a cause and to protect their community.

And thus, the true capacity of the human spirit to gather together, love and be compassionate is shown, yet again. Wherever there is darkness in life, there is always light…