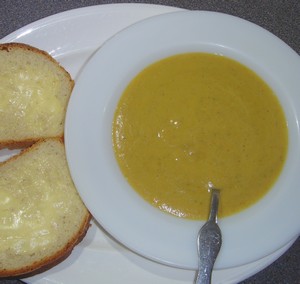 Last week’s Change the World Wednesday Challenge was to give our cars some TLC. Having the correct tyre pressure and clean filters means cars run more efficiently. In turn this reduces our carbon footprint.

I’m proud to say I did indeed get around to checking my tyres – a couple of them were a couple of pounds below the correct pressure. Also my MOT was due, so that’s been done. After spending out for that, a service will be a way off, but my intention is to get it done.

For this week’s challenge Reduce Footprints is sending us to the kitchen! According to WRAP, the average family in the UK throws away one third of the food they buy each week.

Stop and imagine that for a moment. Imagine you’re walking into your home with 6 bags of shopping. Now imagine dumping 2 of them in the bin – absurd right? But that’s what we do. Over and over and over …..

Fortunately food waste is one of my things, or rather, it’s NOT one of my things any more. Each week I try to plan meals around what we have left. Any leftovers from meals get used up as tomorrow’s ingredients.

Today was the perfect example. Little Miss Green hates cauliflower. I’d bought, at her insistence some Edam cheese; which she also hated. Today’s lunch was erm, vegetable soup. Only it wasn’t; it was cauliflower and edam soup. With a flourish of Mama’s Green’s kitchen magic these ‘inedible’ ingredients were transformed into a ‘delicious’ (her words) soup which she devoured.

Sometimes it takes a little creative thought to turn garbage into food!

This evening Mr Green had a curry; again made from leftovers – half an onion, a pepper, meat from Sunday, potatoes and even left over rice was fried as a side dish. He’s sitting next to me now with a satisfied look on his face.

It’s not difficult to turn potential waste into great tasting food. It’s a chance to get creative and you might just come up with some family favourites in the process.

What about you – how much food do you throw away in a week? Don’t guess; because we all think we throw away very little. Why not actually write everything down and take a look at it at the end of the week? You might be surprised!