Is fairtrade worth the money? 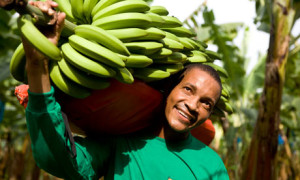 I’ve watched a couple of documentaries recently which have made me question how I choose to vote with my money.

One of my passions is reducing waste, which in itself is a good way to save money, but I’ve realised a really important question which came to me when paying for my goods in a local organic food shop the other day.

The total was quite expensive, and that morning I’d been reading a magazine from a well known supermarket, who had come up with a list of recipes for less than £1 per serving.

I have to admit, that thought was tempting. I mean, who doesn’t want to save money on their food budget?

But as I was standing there, settling my alarming bill I thought “I really shouldn’t question why this fairtrade and organic food is expensive, I should be asking why ‘conventional’ food is cheap“.

And it got me to thinking about the difference between cost and value.

I run my own business and I am not particularly competitive on prices – I’m very upfront about that with my clients. However, I charge my prices knowing in my heart I offer a premium service with such great ‘value added’ my clients are happy to pay. In the end they get far better VALUE than they might with a cheaper company who doesn’t meet their needs.

It’s the same with the way we shop from everything to a new computer to a bunch of bananas.

You can buy all the basic fairtrade and organic food you could need these days, (both on the high street and from online stores like Traidcraft) but there is usually a difference in price. And if you only shop with your wallet in mind, you might not get quite what you bargained for.

A bar of organic, fairtrade orange and almond chocolate, for example, is £2.20. In my local supermarket I can buy the same sized bar for about 99p.

However, the 99p bar doesn’t have organic ingredients and is not fairtrade.

In addition, the 99p bar comes in plastic, whereas the £2.20 bar is packed in recyclable paper and foil.

But that’s not all. There are some pretty horrendous practises that go on in the cocoa trade. For instance, some chocolate-producing companies still support child slavery in plantations along the Ivory Coast; where over a third of the cocoa that makes the world’s chocolate comes from. Thousands of boys as young as 10yrs old, are trafficked to pick and harvest these beans. They are forced to work long hours without receiving any money for their work, work in dangerous conditions using machetes and are beaten.

It sounds like something from the middle ages doesn’t it? But it’s still going on today.

So when you start to think of the pesticides, the non-recyclable packaging and the dreadful human working conditions that might come with your 99p bar of  ‘conventional’ chocolate, it suddenly seems much better value to pay £2.20 for a bar of chocolate and enjoy a guilt-free indulgence, don’t you think?

(If you’re interested to read more, check out Stop the traffik – a campaign working to combat people trafficking and child slavery).

But it’s not just chocolate and coffee that are available as fairtrade. Traidcraft sell a huge range of items from silver jewellery to clothes to household goods.

By supporting fairtrade, it gives farmers and producers in the developing world the opportunity to things we take for granted in the Western World such as healthcare, basic food and the choice to send their children to school.

To put it in perspective, by spending a little more, you can make a big difference.

What about you – do you prioritise fairtrade products? Are you willing to spend more to get better value?