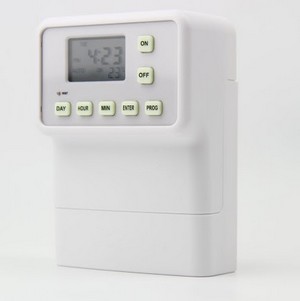 We were asked to review a brand new product from Switched On products.

It’s a device which transforms your existing light switch into a timer switch.

The befits are four fold:

You don’t have to remember to turn lights off when it’s daytime as the timer takes care of that for you.

By turning lights on and off automatically you can potentially reduce your carbon footprint.

If you’re working late you can ensure your child doesn’t get home from school in the dark during the Winter months.

The main benefit of this device is that no wiring is required. It took Mr Green less than two minutes to install – all you do is loosen the fascia screws a little, slide the case behind the switch and you’re good to go.

The product has had rave reviews and has been formally accredited by the Police. Apparently, every 40 seconds, a residential home somewhere in Britain is burgled, so £27.99 is a small price to pay for peace of mind.

Installation couldn’t be simpler. Even I could have grabbed a screwdriver and fixed this on the wall. Set up is straight forward and pretty intuitive. Plus it is suitable for one, two or three gang switches and any type of lightbulb such as CFL or LED.

The device design is simple too – it’s mechanical and consists of wheels that roll over the light switch to set it to the ON or OFF position at the time you stipulate. What’s not to love?

However there are a few things we found annoying.

All in all I’m not convinced I would recommend this programmable light switch. Yes it beats the competition in that you don’t need an electrician and it works with any type of light bulb, but the ‘annoying’ list, for us, outweighed the positives.