How to prevent ‘forbidden fruits’ syndrome: teaching children about moderation 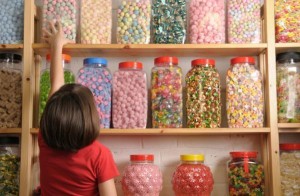 Little Miss Green reacts strongly to refined sugar so we keep her off it as much as possible.

She gets hyperactive (and tired at the same time, the combination of which is not pretty), her skin itches and she sometimes gets tummy ache. Despite these reactions she still loves to eat it. Just like the person who has too much to drink, suffers a hangover and repeats it the following weekend I guess.

We were discussing this the other day because I’ve always been concerned about the ‘forbidden fruits’ syndrome.

We were having a conversation about what a wonderful Mum I am 😉  when I asked her about sugar. I said “So when you’re 18 or you’ve left home and I no longer need to tell you what to do, what are you going to do about sugar?”

She said she’d probably live off sweets and chocolates for a few years to get her fix.

Prevention rather than cure

I’m a great one for prevention rather than cure so I asked her how we could work with this. What could we do to prevent her feeling she ‘needed’ a fix after years of not having free access to the sweet stuff?

A few years ago we had a chocolate box which she had access to once a week, but it wasn’t enough, she wanted more…

Little Miss Green has had a strong sense of self all her life and now she is nine, and is going through an important change in her consciousness, I feel it’s empowering for her to find her own answers wherever possible.  At this age children are transitioning into a new phase in their lives; one where they are becoming a truly separate individual, able to confront the outer world.

After a lengthy discussion, Little Miss Green came up with the following plan:

If she eats crap food for the day she doesn’t get to eat chocolate. If she eats healthy food and has five portions of fruit and vegetables a day she can dig into the chocolates box.

We’ve assessed what ‘a portion’ is, what constitutes ‘healthy food’ and what will be in the big box of chocolatey heaven.

She’s even suggested we try it for a month before deciding whether it’s working out and discussed what ‘working out’ means.

Sounds like a good plan to me; one of ‘moderation is the key.’

What about you; what great discussions have you had with your older kids lately which has resulted in a positive outcome? Or if you have younger children, do you worry about ‘forbidden fruits’ syndrome?