Get your kids outside

I read yesterday that more that three-quarters of parents in the UK admit that their children are tempted to play indoors with computer games and dvds rather than play outside.

As a result parents said that their children often spend as little as one hour each week playing outdoors.

Read that again, dear readers – ONE HOUR a WEEK! ADHD and obesity anybody?

In fact, American journalist, Richard Louv, author of Last Child in the Woods, coined the term “nature deficit disorder” (an echo of the medically-established condition, attention

deficit disorder) to describe the deprivation, sometimes amounting to mental illness, of children who grow up without contact with the natural environment. He’s written a brilliant ‘must read’ book that will convince you to get your kids outside called Last Child in the Woods (click on the book to buy!)

I have to admit I noticed a pattern last week. It was half term around here and on Monday and Tuesday the street was filled with kids playing on their bikes and scooters. By Wednesday I kinda didn’t notice because Little Miss Green was at Grandma Green’s for the day so I had other thing to do with Mr Green 😉

But on Thursday, Friday and Saturday, Little Miss Green didn’t have a single child to play with. Now, had they all gone away for three days? I think not. My guess is they were inside……….

We don’t have a TV here at Chez Green, but when we went on holiday last year there

was one in the cottage we rented. Oh my – that thing sucks you in and bleeds you dry. There was total crap on there, but I found myself mesmerised by it all. I found myself glued, most of all, to the things that made me feel angry.
I noticed at a friends’ house once when they didn’t turn the TV off that we couldn’t help watch it. We’d be having a conversation and gradually, we would all turn our heads to the TV and before you knew it, the room was silent apart from the actors.

Geesh, that thing has POWER over us! So what it does to the kids is anybody’s guess. (well, actually I have lots of ideas on that, but I’ll save it for another day).

And the computer games just terrify me. Another friend told me of her son who spent hours a day on some sophisticated Virtual Life game. Apparently, if he stopped playing, lots of his friends would ‘die’. Talk about hooking you in. He wouldn’t come down for dinner, or spend time talking to his mum because all these people were relying on him to be online.

Yet, when they’re outside playing, there is no loyalty anymore – there is no sticking up for friend or ‘dying’ for them out on the streets. It’s each child to their own (or maybe I need to move house).

No wonder these kids are disoriented and don’t know how to focus or play anymore. Do they actually know who they are and what their reality is?

So what to do when you are the parent of a child who would rather spend time with the X box than outdoors making a fort from a cardboard box?

I guess you need to look at yourself first. Do you actually *prefer* that your children are indoors where they are ‘safe’ and you know what they are up to? Let’s be honest, we’re all scared of our kids being abducted, knocked over or falling out of a tree and breaking their necks, but my goodness – what a message about the world to give them.

A friend of mind confided that her 15 year old daughter doesn’t go out on her own and she knows it is down to her own projected fears. For the past 15 years she has been giving the message that it’s not safe out there, and her daughter has taken it on as her own truth.

And hands up who isn’t delighted when their child skulks off to their room leaving the parent with some free time? We’re only human; don’t beat yourself up about that one.

Then there is the convenience. Yep, I get pretty irate when I’ve just cleaned the floor and Little Miss Green is in and out of the door with muddy shoes and wet clothes, but ya know, I guess I won’t be wishing I’d cleaned the floor more when I’m on my deathbed.

And then, the majority of parents these days are overworked, stressed, without enough hours in the day (why is that when we have every gadget and gizmo that is designed to save us time?) to even think about getting outdoors with their children in the evening and weekends. THEY want to chill in front of the TV, so their children do it too.

But oh how we loved our space hoppers, didn’t we? And we had endless fun with bikes and roller skates. And cardboard boxed provided entertainment in spades. We explored trees, fields and even the alleyway behind our houses. We spent hours making shops, playing teachers and not to mention doctors and nurses. We collected marbles, smashed each other’s conkers and played tag until we could run no more……….

Could you start to do one activity a week that gets the kids outdoors? Sure it seems like a lot of effort when all you want to do is exercise your index finger on the remote control, but I bet you, no, I GUARANTEE that you will love it and so wish you had done it earlier.

yes, your kids will roll their eyes, stamp their feet, swear at you and have lips dragging along the floor behind them, but I bet secretly, that eventually they’ll come around, let that façade of ‘I’m grown up and I know everything about life’ down and start having FUN.

Just pick something small to begin with – a trip to the local playing field with a football and picnic, a day trip to the beach, a family bike ride, a treasure hunt through the woods or gather some sticks and build a den. It’s beautiful weather at the moment, so the perfect excuse to get out there.

Why not rent an allotment and work on it as a family project? Or if your garden allows, give your children some pots or a plot of land that is their own. If they don’t take care of it, everything dies – it’s a good lesson!

If your child has an interest in wildlife, join your local wildlife trust and get them involved with a volunteering project. You might be able to get involved with a litter pick, some dry stone walling, traditional hedge laying or simply go out there and get to know about wildlife in your area. Make a bird table and give your child the task of going out there everyday to put food on it – it’s a start! Even if they don’t run around, at least they are in the fresh air.

Find a local outdoor swimming pool or take them camping for the night. You can camp in your back garden, but lock the backdoor and make them do the real thing! Is there a boating lake near you? These are great fun and teach some valuable skills at the same time as enjoying yourselves. put the sprinkler on and let them run through it, have a water bomb fight or find a long piece of rope and teach them skipping games 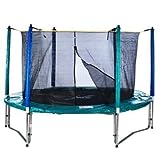 Younger children might like to collect treasures – feathers, leaves, pine cones and bring it all home for some messy collage fun. Older kids might prefer a quiz about the things they see when out and about or a physical challenge such as building a bridge out of old planks of wood.

If you’ve got money to invest and the space to put it, one of those huge trampolines are total value for money. Children here use them from the age of 4 to teenagers. 10- 12 ft is about right. Little Miss Green even goes on hers every day come rain or shine…………