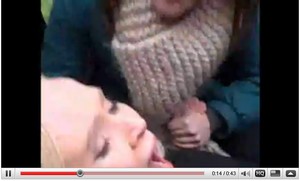 I’m not easily shocked, but this video, created for Leicester City Council, in a bid to reduce teenage pregnancy rates leaves me aghast.

Leicester has a higher-than-average teenage pregnancy rate, with one in 20 young girls falling pregnant.

The video is taken on a mobile phone and designed to make you think you are about to watch a playground fight. In fact, you’re about to see a teenage girl giving birth in the school field, surrounded by a gang of kids.

It was initially banned by YouTube, but the NHS Trust has defended its decision, saying it was designed to deliberately “shock” and “provoke” young people.

Tim Rideout, chief executive of NHS Leicester City, said “The city’s Teenage Pregnancy and Parenthood Partnership has been successful in cutting the numbers of young girls getting pregnant.

“But to make a long-term difference we need more education on safe sex.”

This hard hitting video was made after teenagers in the city told them conventional health education campaigns made little difference to their attitudes and that they wanted something memorable to get the message across.

Well, memorable it is; but not for the right reasons. The whole thing leaves me feeling saddened, not inspired. To use such as ‘fear tactic’ to  try and stop our teenagers getting pregnant won’t work anyway.

Does my eight year old not cross the road because she knows of the dangers of getting hit by a bus? No, of course not. And neither will a teenager not have sex because she thinks a birth will be traumatic.

This video portrays teenagers as animals with no compassion, full of fear, with no idea of dignity.

Giving the message that birth is terrifying, painful and fearful will not work, but it will work to medicalise the births of the teenagers and women who are so touched by that film that it is ‘memorable’ to them. They will create their own reality and suffer for it.

The film ‘teenage kicks’ plants seeds of hysteria, when birth does not have to be like that. Indeed, if we take away the fear then it can become a peaceful, connecting and empowering experience.

What our teenagers need is to be treated with respect and dignity and be taught how to feel good about themselves. So good that they do not need to turn to an empty sexual relationship in order to feel better about themselves.

They need a jolly good listening to, to learn to respect and love themselves, to be shown that you can say ‘No’ without fear. They need to be taught how to nurture themselves, how to get their needs met, how to find emotional fulfilment so that they don’t turn to sex, or drugs, or drink, or consumerism to fill the void.

In my opinion, Leicester City Council have got this all wrong. Once again, our society is treating something at symptom level.

I’m not saying I have the answers, that I know how to do it, that I live in a perfect world where my daughter doesn’t get into trouble. It’s more a call for humanity. A call for us to remember what is important in life. An urgency for us to reconnect with feelings of love and openness towards one another, so that our teenagers do not feel so lonely, isolated, fearful or confused that it has reached a point where we have to use shocking and provoking ways to prevent our fear as parents from materialising.

It will take a massive shift in consciousness, a huge lifestyle change even, so that we can be there – body, mind and spirit for our children …

What do you think?