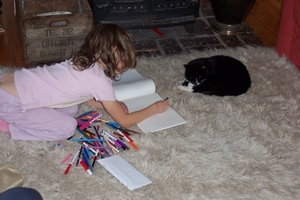 The children in the UK go back to school this week. Some won’t be able to wait to get there, others will be waking up with ‘tummy ache’, crying at the school gate and ‘putting a brave face’ on their day.

This will be our second year of home educating and what an education for me it’s been!

A year out of school then and we’ve tried everything. We began, in a blind panic getting hold of the National Curriculum to make sure that we did everything ‘right’. At first, enthusiasm was high, from both of us. Little Miss Green was eager to keep the security of a daily rhythm and I didn’t want her turning out to be a delinquent who was unable to secure a job.

My desire, however, was to wean school out of her and return to a more Waldorf Steiner form of education. I find this to me more rounded, one that supports the whole child, not just feeds the brain and we adopted this for a while …

Now we have moved to a more autonomous approach. I am on hand physically and emotionally all the time, but we get on with our own things until something arises. A question about why birds fly, how babies get into tummies, why the clouds change shape, how fast can a lion run. In between times there is cooking, cleaning, gardening, and some serious playing to be done.

She wanted to learn to swim, to ride a horse, to go on nature walks, to read to me, to learn Spanish and to figure out how long it would take her to save up for a dolls pram.

In shops she took the needed money from my purse, looked at the compass in the car on the way to places (and religiously told me at every turn which direction we were in),  wrote shopping lists.

At home she made pirate ships, fairy kingdoms, became a Queen (and threatened to chop off my head on several occasions), looked after snakes, combed the cat, polished the table, learned how to walk across a cattle grid, watched squirrels, learned to clean the windows and fed the washing machine.

Now, after a year of home education and no more forced ‘sitting around the kitchen table’ we’re ALL settled into this routine and I’ve realised that LIFE is the education.

We’ve all de schooled ourselves and moved into a space of trust. She WILL be ok. And I’ve looked at my fears and realised, if she had been at school all her life and was crap at maths, then we’d have felt sorry for her struggling with maths when she wasn’t a natural at it. Now she is home educated, if she’s crap at maths then all eyes fall to me for being unable to teach her properly.

So, you know what? I’ve decided not to worry about that any more. This week Little Miss Green came to me with a booklet. “Can I do these?” she asked, handing me the paper. It was an old maths SATS test that I panic bought at the beginning of the year!

She lay on the floor in the sunshine and duly completed the paper. No stress, no fuss……

Yesterday, she came to me with eyes as big as saucers and exclaimed. ‘When I’m 15 I want to be a lady farmer. I want you to come with me to live in my big Farmhouse. If I want a big farmhouse, because it will have lots of fields and a swimming pool, I need to write a book. So I’m going to write one of wildlife. Will you help me? I want to write for 4 hours a day……….’

And thus it went on. Yesterday, she wrote part of her first chapter on Robins. Now I know all there is to know about robin’s nests and she is proudly telling me that she has just 8 years to complete her masterpiece.