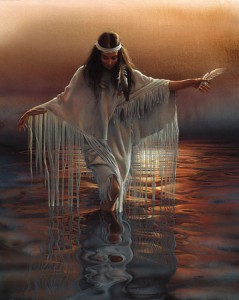 After going to a mainstream C of E school for 2 years and a few months spent enjoying herself at a local church group once every week, Little Miss Green began to struggle with her beliefs.

She was getting more and more ‘I don’t like church’ and I listened to her voice her concerns and share her frustrations. She was getting annoyed that all her art work had to have quotations from the bible stuck all over them! In her mind, this has ruined her picture. She began to get cunning and stick these quotes on really lightly so that as soon as she came home she could joyfully rip them off and throw them in the fire with great ritual attached!

She has always been very connected with nature – plants, animals and especially[amazon-product align=”right” bordercolor=”#d8bfd8″ small=”1″]0892815507[/amazon-product] trees and I’ve left it up to her to figure out what feels right to her, spiritually.

I could see her struggling with the ‘What if I don’t believe?’ ideas and she would every now and then ask me something, tell me something or we’d try and help her come to her own conclusions; something that allowed her to feel comfortable in her own skin.

At the beginning of this year she wondered if she could celebrate Christmas any more. She had come to the conclusion that she no longer believed in God and Jesus and that she believed in Mother Nature, fairies, angels and Father Christmas instead. But, she needed to know whether Father Christmas would come to visit if she didn’t believe in God.

[amazon-product bordercolor=”#d8bfd8″ small=”1″]0863151582[/amazon-product]We talked about the idea and I told her as much as I could – that people all over the world have their own ideas of belief, of a ‘Higher Being’, of the Universe and their own personal celebrations of a God-like figure. Some don’t believe in any of it; taking a more scientific approach to life. I told her that some people don’t celebrate Christmas at all. That produced one of the rare instances of wide-eyed  silence from her.

I explained that perhaps the Winter Solstice or Yule might feel better for her to celebrate as that was directly linked to the seasons, mother nature and the earth – the things that had meaning and value to her personally.

She decided that felt good but there was still a lot of reluctance. I mean, what seven year old girl is going to turn down a sack of presents arriving down the chimney in a hurry!?

We still have things to work out on that one – it’s easy to be brave in March, but when November is upon us, the shops are adorned with twinkly fairy lights and plastic Santas are sitting in their grottos it might be another matter.

This week she has been concerned about Easter. “I suppose I can’t celebrate [amazon-product bordercolor=”#d8bfd8″ small=”1″]095070623X[/amazon-product]Easter if I don’t believe in Jesus can I?” she mused yesterday as we were walking up the hill. She didn’t want to miss out on the chocolatey fun, so I assured her that something good would happen. Our message to her has always been that what you believe in, you manifest. From a good body image to ‘I can do it’, to Ostara and her fairies delivering chocolate bunnies and eggs.

One step at a time

It’s going to be an interesting year. I’m blessed that I have a child who is so spiritually aware at such a young age. And it comes as no surprise that when something feels wrong to her, she can’t bring herself to go along with it. She is a girl of principles. I can sense a lot of inner conflict going on as she tries to figure things out and it’s an emormous and brave step to take to say No to everything you have been bought up to believe and to find another path through life.

Many adults are still walking paths that do not feel right to them because of the fear of change. But I guess this generation is the one to embrace change, tear down the walls of authority and question everything they have been taught. They seem to know their own minds much more than we did, somehow …

What about you? Have your beliefs changed as you have grown older? What about your children – do you think we need to guide them towards our own beliefs or let them work things out for themselves? I’d love to hear your views.