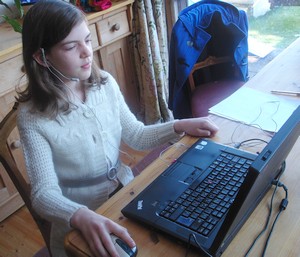 I recently trialled BrightSpark as part of our home school curriculum.

Little Miss Green had a SATS assessment and is around age 7 for maths, whereas her English is around age 11. I’ve never been one who thinks children should be all-rounders, it’s evident her gifts and interests are in English, but now she is flexi schooling, maths is becoming an issue and is continually being flagged up by her school.

We went to Brightspark to see if they could help…

BrightSpark is an online 1-2-1 maths tuition service. Teaching is done via a headset and interactive whiteboard. Everything is online, so you don’t need to download anything.

After our sessions, here’s a review of the good, the bad and the ugly …

There is a fantastic online resource where you can access and download additional content and test your progress with automated testing and presentations. You can also practice with past papers and mark schemes.

You can review your previous sessions, which is helpful for use with revision and gives you the ability to go over anything you are unsure of. These features really help you consolidate your learning.

Every tutor was very polite and punctual.

Once we got it working successfully, the interactive whiteboard was a great learning tool.

On occasions, LMG was awarded smiley faces, thumbs up signs and stars – as she is a child who learns through reward this worked well to keep her motivated and enthusiastic.

I sent a feedback questionnaire to BrightSpark and within an hour I had a very positive response. I was told that more detailed feedback and assessment was on their list of improvements and I was invited to see the improvements as they come out. 10/10 for customer care on that!

It took us ages to realise (and the tutor couldn’t help us) that we were trying to write on a whiteboard with white ink – duh! We lost 5-10 minutes of our first session figuring this simple error out. When we went for our next session, we ended up with white ink again, so this is a basic functionality problem which hasn’t been addressed.

We had to type in the key stage our child was at and select the topic we wanted to cover when booking the session. I was expecting the tutor to spend the first 10 minutes or so assessing the level my daughter was at, but they went straight in with questions that were far beyond her capability. At one stage my daughter ended up in tears because she found it so difficult 🙁
As I said, although my daughter is technically key stage 2, her ABILITY is the top end of key stage 1. Maybe I should have addressed that before the session, but it would have been good if the tutor could have picked that up.

For example, LMG is still struggling with her basic tables and one of the first multiplication questions was 324×8 which totally threw her!

I booked two sessions for multiplication as this is what LMG was learning at school. When we went for the second session I realised all the questions were the same as the last session! It would seem that there is ONE set of questions for each part of the system, but this was not pointed out to me. It was still useful because LMG had not remembered these were the same questions, but for the ‘paying parent’ I felt a bit short changed.

Whether this is a cultural thing I don’t know – maybe us Brits are softies, but on two or three occasions, LMG got a ‘simple’ multiplication wrong and was quite chastised. I know some children respond well to this sort of approach, but LMG needs more smiley faces and stars rather than being told off for a simple mistake! She struggles enough with maths without the need for *feeling* she is doing badly by someone saying “NO!” down a headset to her.

The feedback was pretty unhelpful. On one session we had

On the next session we had:

Some of the tutors (all tutors are based in India) had accents which were nearly impossible to understand. I had to sit by my daughter for the entire session and virtually ‘translate’ everything they said. This was a problem for a subject which LMG struggles with anyway. The key to teaching is being able to communicate effectively and to be honest, the accents were a huge barrier to her learning and understanding.

On two out of the three sessions, the quality of microphones the tutors were using were not up to par. It was extremely difficult to hear on occasions which made learning even more difficult.

I think this is a great concept with lots of promise which could be improved in several areas. The use of headsets and interactive whiteboards really brings learning into the 21st century and for home schooled children or for kids who are struggling (or gifted) at school, it’s a way for parents to be able to afford private tuition. However, being able to understand the tutor is the number one prerequisite of learning and there were areas where this was difficult – such as poor quality microphones and strong accents.

When setting up an account, we had to input which key stage our child was at so tutors could identify the relevant curriculum. However, I felt there was a huge part of the tutoring missing, which was finding out which level the child was at. Without this knowledge, the session cannot be geared to the child’s level. As such the session really pushed LMG – this was ok, but she did get upset and this could have been prevented. In addition, some children learn through lots of praise and the gentle reassuring approach whereas others learn through being pushed – a couple of minutes spent talking to the parent before the session or a questionnaire could address all of these issues to make the session more tailored to the individual child in order to get the most from the experience. A child who is upset is not open to learning …

The price is good value – to get a maths tutor to come to our house would cost around £25 per hour, whereas these sessions are half that cost. I must admit I did wonder if Indian tutors were used because, rather than “having a long and rich heritage in mathematics as well as a world-class higher education system” they are ‘cheap labour’ (and that would have been hard for me to endorse, ethically) but I have since discovered that they are paid three times the average local wage, so to be honest, it’s a win-win all ’round.

If your child enjoys using a computer to learn (mine doesn’t particularly) and they can get over the obstacles then I think BrightSpark has a lot to offer. One school in the UK is even using BrightSpark rather than having children in with a maths teacher which I thought was very interesting. I’m not sure it’s the perfect set up, there is something very important about the oral tradition, connecting with people physically and seeing and sensing them as a person, but for an hour a week, it worked for us.