Want a happy, healthy child? Then sign this petition 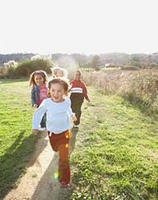 In the UK, most children start school in the September following their 4th Birthday. Their FOURTH Birthday! They are just babies aren’t they?

If that isn’t enough, legislation is due to take effect soon that involves a set of Learning and Development Requirements, which must be followed by providers of care for children below 5 years old – the age of compulsory education in the United Kingdom.

All childcare providers, including childminders, nurseries, kindergartens and pre-school classes, are obliged to register under the Childcare Act in order to operate legally.
They include controversial targets for literacy such as 5 year old should readily use written language in their play and learning, they should show an understanding of how information can be found in non-fiction texts to answer questions about where, who, why and how and begin to form simple sentences, sometimes using punctuation.

My daughter is just getting to grips with the idea of punctuation NOW and she is a bright seven and a half year old.

We took our daughter out of school when she was five because she was already showing signs of stress. She was pulling out clumps of her hair, wetting herself at night and becoming ‘disruptive’ in the class room. More alarmingly her self esteem and confidence were being eroded. When she started to use words like ‘can’t’ then it was time to pull her fragile soul out of the institution.

She is reclaiming her childhood and learning through play. As you’ll see from a post last week, she’s decided to write a book. So, not learning to read until she was 5 clearly hasn’t hampered her has it?

We need to let our children be children, let them develop at their own pace. It burdens me to think of children in nurseries and kindergarten struggling to read and write when their brains are not ready for it.

It’s like trying to help a chrysalis to open. If we do, it whithers and dies. Think of that the next time you’re told your child is not up to a certain Government standard.

Even Einstein recognised that imagination was the most important thing! Beatrix Potter was home educated, left to her own devices with no ‘formal education’ and I don’t think she did too badly either.

My daughter is crap at maths ‘on paper’ but ask her how much money she has saved up and how much more she needs to buy something she wants and her grey cells soon start firing! Put some home made cakes in front of her and her Dad and she’ll divide things equally, down the the last meticulous crumb.

She knows how to make a meal for herself and will bring me the herbs she needs from the garden if she gets ill. She knows the name of her Guardian angel and how to light a fire. She nurtures her ‘babies’ and takes care of the cat.

Will those qualities put a tick on a SATS test? Of course not, but who cares? She is happy, healthy and believes in herself. She stands in front of the mirror naked and says ‘look at my beautiful body’. When she was at school the words ‘fat’ and ‘ugly’ and ‘stupid’ entered her vocabulary .

So yes, I’ve taken her out of school and brainwashed her – washed her brain of all the lies and crap that the school playground instilled in her; and given her back her freedom.

PLEASE, take a moment to sign this important petition.

They urgently need people to sign so as to get to 8,000 by the time it closes on 18th Sept. If you care about the future of our children, then it will only take a moment to sign up and have your voice heard. If you’re planning children in the future or have little ones yourself, it is vital that you sign so that your children can enjoy a childhood.

If you have grown up children, then sign it too, because one day your grandchildren will be part of the system. If you are young, free and single and not even thinking about kids yet, just take a moment to try and imagine what it will be like for your 3 year old to struggle to write their name.

If you have more time on your hands and want to learn more about The campaign for an Open Early Years Education then have a read on their site.