Do’s and Don’ts of Shovelling Snow off your Roof

February 12, 2019 | Mrs Green | Comments Off on Do’s and Don’ts of Shovelling Snow off your Roof | Environment issues 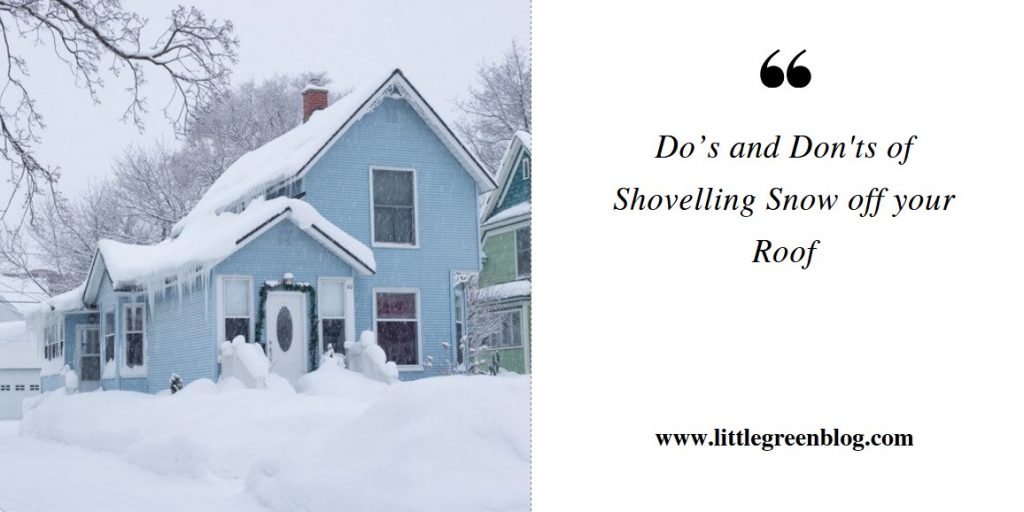 Typically, we don’t get a lot of snow in England, but when we do the country seems to grind to a standstill.

And it’s no surprise, because we’re not used to dealing with the white stuff that falls out of the sky!

Something I’ve learned about recently is there is a right and wrong way to get snow off your roof! I didn’t even realise that you *should* remove snow, but thinking about it now, it all makes sense.

Let’s start with the weight of snow. Did you know that one square foot of one-inch deep snow adds a pound of weight to your roof? Here at Little Green Blog, we have solar panels too and if they’re covered in snow they don’t work.

As a general rule of thumb, experts suggest removing accumulating snow from your roof every six inches of snowfall. This being said, every roof is different and sometimes snow accumulation isn’t as much of an issue as ice build-up can be.

You can buy heated cables to run along your roof – however these are often pricey and can actually contribute to ice dam creation. The snow will melt while the heated cables are powered on but the second they are turned off, if the temperature hasn’t increased, that melted snow will re-freeze into ice and possibly ice dams – which can be even more problematic than snow.

Heavy snowfall can put strain on both flat and sloping roofs, and although flat roofs have many advantages, with rubber roofing such as that which Rubber Roofs stock being eco-friendly, long-lasting and flexible, you do need to take a little extra care during snowy weather.

What you choose to help you remove snow is important, not only for efficiency, but to prevent damage to your roof. Generally, plastic tools and snow rakes are recommended as, unlike metal devices, they shouldn’t cause damage to pitching or shingles.

When clearing your roof it can be tempting to attempt scraping the roof clean. This can actually cause more harm than good. It is suggested that you leave a light layer of snow behind as this will not cause further structural strain, whereas shaving away all remnants of the wintery weather can result in damage to your roof.

Sometimes it can feel like you’re getting nowhere raking or shovelling your roof and it can be tempting to try speeding up the process with the use of an electric heating device, but melting snow in this way may just result in it refreezing to ice and causing more of an issue in the long run.

Although snow on sloping roofs should for the most part slide off itself, there are times when your house could do with a helping hand. On a traditionally shingled roof, it can be beneficial to leave a light layer of snow. Removing the bulk of the snow will help prevent the formation of ice dams without damaging your roof.

An ice dam is when ice accumulates, usually on the edge of a roof, preventing melting snow from draining off the roof. As there is nowhere for this water to go, it begins to feed into the dam, making it larger, heavier, and harder to remove. As well as putting pressure on the home, when the ice melts, it can then make its way into the home via any holes in the roofing which can lead to mould and structural damage.

What about you – were you aware there were a right and wrong way of getting snow off your roof?