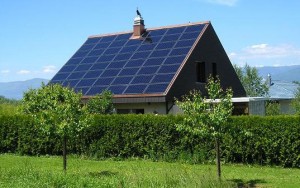 As you know we’re huge fans of solar panels, here at Chez Green.

Although our own set up is small, we have plans to increase as our finances allow.

It seems many of our readers are intrigued by the idea of harnessing energy from the sun too so today I’ve outlined 4 of the most common questions that arrive almost daily in our inbox!

How do solar panels work?

We all know that solar panels utilise energy from the sun but how do they actually work?

Roof-mounted photovoltaic (PV) panels are made up of cells which capture the sun’s energy and convert it into electricity.  Photovoltaic cells are made of materials including silicon which is a semi-conductor. When light shines on the cell some of it is absorbed then a photoelectric effect creates a flow of electricity which can be stored in batteries for later use, used immediately through an inverter or fed back to the National Grid.

Are solar panels still worth investing in?

There are concerns among home-owners that solar panels might not be worth investing in any more since the Government cut the Solar Feed In Tariff rates.

In January 2012, the Government was taken to Court because it was deemed the Solar FITs Fast Track review was unlawful. The Government appealed and was unsuccessful. Currently the Government are seeking permission to appeal the decision to the Supreme Court so we’re still a bit in the dark as to where we stand.

My take? What’s not to love about some nice payback anyway?

Electricity bills are increasing all the time and if oil DOES run out, renewable energy such as solar might become more popular.

Solar panels are ugly; what are my options?

Personally I LOVE solar panels. I love wind turbines too but I do understand that some home-owners find solar panels unsightly. Fortunately there are other options such as solar tiles.

Solar tiles replace conventional roof tiles, so instead of a roof with solar panels mounted on top; you end up with a solar roof!

Solar tiles can be integrated into a new build or be used to replace an existing roof. They are designed to blend in with your existing roof tiles whether you have slates, shingle or interlocking concrete tiles.

Will solar panels work without sun?

If you think about using a solar powered calculator, these require light, not sunshine to work – solar panels on your roof are exactly the same. In fact, PV solar panels can become less effective if they get too hot!

This means that even on an overcast day, you can still be generating electricity through your solar panels. It won’t be as much as a bright, sunny day but it should be around 40% of the potential electricity yield. Good news for Britain!

And don’t worry; you’ll never be sitting in the dark and cold! When there isn’t enough daylight to generate your electricity, you can simply draw from the grid again.

What about you – do you have questions for us regarding solar panels?