CFLs, LEDs and incandscent light bulbs. Are they energy efficient, sustainable and safe?

CFLs are great for reducing household CO2 emissions, being more energy efficient than regular incandescent light bulbs. They are more sustainable because they last longer, therefore producing less waste for the landfill. However, emerging opinion seems to suggest that CFLs are not very safe. They have been linked with a range of health conditions including migraines, dizziness and skin reactions and they contain small amounts of mercury. LEDs are still limited on their functionality and choice, so what is the answer to energy efficient, sustainable and safe lighting?

Until a few months ago, I used to advocate CFLs myself as a great benefit to the planet and would bore friends with 101 reasons why they should make the switch.

Since installing them though, I started to suffer headaches, sleep disturbance and a sense of dizziness / disorientation.

I put my laptop back from wifi to hardwired and the headaches stopped almost immediately. However the dizziness and insomnia persisted.

I started to read up some more about CFLs and the most obvious fact had escaped me all this time. They are simply fluorescent bulbs, albeit in fancy shapes. Doh! I had never made that simple link.

A few years ago when I was working in a brightly lit shop, I started to get migraines for the first time in my life. I was also frequently tired and started to get dizzy spells. I put it down to

all sorts of things (actually in those days, I probably didn’t even think that much about it and just popped a nurofen to deal with things) but eventually made the connection between a combination of fluorescent strip lights and an old CRT monitor I was using.

It was a pretty relaxed place to work, so I was able to use the computer for 15 minute bursts and keep the lights off in the shop most of the time as it had plenty of natural light. At home I had regular incandescent lights so it wasn’t too much a problem.

Fast forward a few years to my new eco awareness and I smugly replaced the blown incandescents with CFLs in my belief that I was going to save a great deal of energy, CO2 emissions and money.

Then the other week we had a CFL break on us. Dh was just replacing one in a lamp and the bulb kind of crumbled in his hand. I hadn’t told him my findings about mercury, so he just picked it up and stored it in the box ready to take back to the shop, assuming this was normal protocol.

It was only later, when he told me about the bulb breaking that I told him about the mercury content and the fact that the recommended advise is to vacate the room for 15 minutes, wear gloves, put the bulb in a plastic bag, seal it and dispose of it safely.

Why don’t bulbs carry some sort of clear warning on them, rather than a crossed out wheelie bin which, without his glasses, dh can’t even see?

When I queue to buy something in a shop, the cigarettes have huge warnings on the

side about how smoking kills. Why not do the same for CFLs about the mercury content?

This got us thinking to a decade down the line when our CFLs start to wear out and we have to get rid of the old ones. How many people will actually ‘dispose of them safely’? ie take them to the recycling centre or return them to the store? And of the stores that take them back, how many of the bulbs will actually get recycled and safely treated rather than conveniently thrown into a skip at the back of the store?

How much mercury will get released into the atmosphere then when our millions of lightbulbs end up in the landfill? Because you can be guaranteed that some of them will. The toxic mercury will probably leach into the water table, with all kinds of consequences

We are told that there is only a small amount of mercury in each bulb and that each energy saving bulb we use will drastically cut down on the amount of mercury released by burning fossil fuel. This feels however, like we are simply buying a short term gain………..

With recent hot news being a proposed banning of incandescent bulbs, where does that leave people who are sensitive to the colour saturation or the sensitivity to the flickering of CFLs?

And let’s keep things in perspective here. Lighting accounts for about 1-2% of a household’s CO2 emissions. Daily actions such as not using the tumble dryer, walking a mile to the shop rather than using the car and switching the TV off standby at night would save us the same amount. 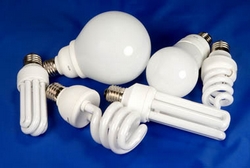 reas where much more attention and draconian measures, such as *banning* something should be given.

The latest suggestion are LEDs. Have you tried to buy them in the UK recently to light your home?

We bought 4 LEDS (they were 1.5 watts each, equivalent to around 7 watts of conventional light bulb light) to go into our kitchen. Well, if you like the dimly lit nightclub effect they are fine. But if you want to actually make sure you can see your fingers when you’re chopping an onion for tea then they are not so fine.

We’re pretty frugal consumers, but these still cost us Â£20 for something that doesn’t do the job adequately.

What we have in the kitchen now are the 4 LEDs and one CFL. It actually makes for a really good colour. I’ve been feeling pretty depressed recently at the lack of ‘right colour’ from the CFLs we have tried. And believe me, we have tried a lot of them. I can cope with them in all the rooms except the kitchen. I like my food to look like food and not like it is from another planet with a green or blue hue.

So we totted up how much it would cost to buy the 5 watt LEDs to use in the entire house and we’re talking *hundreds* of pounds and I’m still not convinced we would get the spectrum of light we are after.

Don’t get me wrong, I don’t mind compromise. I don’t mind a little ‘giving up the good stuff’ or giving up convenience in order to benefit the planet or my health but good coloured and bright light is like a soul need to me. It really is!

That will sound crazy to people who are happy to live in basement flats, think women who care about the colour of lighting have nothing better to do, have never stopped to think about their needs in life, or really don’t give a damn about the colour of their lighting but good light is something I have recognised I need to function well.

If you happen to be an artist or photographer, you will know exactly where I am coming from with the colour issue!

People are talking about LED lighting as being the future of lighting but at the moment we are sadly lacking in choice in the UK. I know the technology is out there to produce a good coloured, good light spectrum bulb, I guess the demand isn’t high enough yet. The Government are moving towards the ‘ban the bulb’ idea and promoting CFLs, so no manufacturer is going to produce reasonably-priced LEDs all the while people are buying energy saver bulbs.

So, what are two eco worriers to do in such a situation? Well, we’re just going to ha

ve to make these lights ourselves!

This is our latest project (the Royal We you understand, dh is the brains behind all of this. I just come up with ideas and he manifests them infront of me – what a guy!). With a background in electrical engineering he is going to put his years of knowledge to good use and see what he can come up with.

He’s been scouring the internet, pouring over plans and prototypes and is excited at the prospect of being able to run our downstairs lighting on homemade LED lighting, powered off old car batteries charged by solar power.

Watch this space for developments 🙂