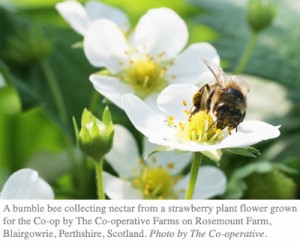 As you know, we’ve planted a bee garden here at Chez Green. It’s looking a little sparse at the moment, but I’ve already had bees on the chive flowers, which is so exciting.

Someone left a comment on little Green Blog the other week telling me about ‘Alternative plants’; a website selling lesser-known native plants. I had a look around and emailed Rosemary, the owner of the site.

Although Rosemary tells me very modestly she is not an expert; she is certainly passionate and enthusiastic about her subject. Author of the book ‘Liberating lawns‘ I took the opportunity to catch up with Rosemary and ask some questions about bee friendly plants.

There are many different species of bee with different requirements at different times of year. To cater for as many as possible you need to have a good variety of flowers.

Some have short tongues, some have longer tongues (so can reach nectar hidden within deeper flowers) and all need some mixture of pollen and nectar to survive.

Different plants will supply bees with either or both as a reward for pollinating them.

Are there any particular plants that bees love?

Zygomorphic flowers (i.e. those that are symmetrical in one axis, like foxgloves and deadnettles) are particularly good for bees, so you certainly need some of these in the garden.

I’ve chosen glove thistle after reading bees like them for my bee garden; is this is a good idea?

Globe thistle or artichoke is wonderful later in the season, but it is a large, statuesque plant and I think it would be better off given ample space in sun if you can afford it.

You say bees need different plants throughout the seasons, what would you suggest for spring and early summer?

What about early to mid summer?

Perhaps an umbelliferus plant like lovage (which is also handsome and edible), angelica, or even field angelica would be a good idea and it would also serve a lot of other insects, but only if you had the space. You would also have to deadhead them to stop unwanted self-seeding.

Say someone is limited for space; if they had to choose only three or four bee plants what would you suggest?

I think they would be marjoram (decorative, edible, aromatic, long- flowering and attractive to butterflies also), borage, white deadnettle and spotted deadnettle.

The beauty of the last two is that they can be cut right back after their first flush of flowers to produce further crops of flowers later. This also stops them from getting straggly.

I have had forms of spotted deadnettle (e.g. Lamium maculatum ‘Annecy’ and ‘Brightstone Pearl’) flowering almost year-round on this basis.

Any bee friendly plants that aren’t good for a small space?

Buttercups, germander speedwell and thistles are vigorous but if you can keep them in an out-of-the way spot under control, bees and many other insects will appreciate them.

Any final tip for planting a bee garden?

As with pretty much everything in life, variety is the key and remember, that most of the suggestions will need a sunny site.