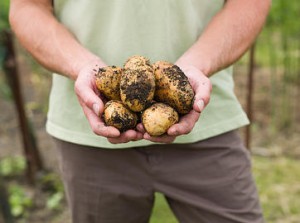 When we were challenged to write our Green goals for 2013, I mentioned the garden.

The garden, here at Chez Green, in a constant source of stress I have to admit.

I have lofty ideals, images of me harvesting beautiful organic produce, but the reality is I’m really not a gardener.

I like to eat the produce and look out onto a nice space, but I’m a fair weather gardener at best (if at all).

I have two neighbours whom I’m learning a lot from.

They spend half an hour outside every day chipping away at all the jobs from sowing to weeding to harvesting.

I admire them and wish I could be like them, but that’s just not the case.

I wake up with the energy and motivation to dig an entire bed one day, burn out and then leave it for the weeds to grow again. Or I sow everything at once when the mood strikes and then end up with a glut that I can’t manage.

Every year though, with my inner optimist by my side, I claim ‘This is the year of the garden!’ and I have the best of intentions.

Here are my plans for making my garden productive and sustainable this year:

Something we achieved last year was to design and build a three part composting system. We’ve had one of those plastic darlek bins for years and it was useless. All I ended up with was a slimy mess complete with resident rats and wasps and in the winter I had to throw food scraps away because the compost stopped working.

Now I have this amazing three part system Mr Green made for me, I have my very own compost to use! I’m super excited about that.

As I mentioned, I’ll sow a glut of seeds then complain that I need to harvest a glut! I’m going to learn from my neighbours and try and do a little bit every week. Yes I’d love to say I’ll garden daily, but I know that’s not realistic. So I’m going to plant more things in pots, rather than the garden; which I think will be easier to manage, and see what I can achieve.

Having a water feature is not just nice to sit next to, it’s beneficial to the eco system as well. We have clay soil which attracts a lot of slugs, so if I can create a small pond and entice some frogs in, they’ll happily eat the slugs. It gives me the perfect excuse for a bit of prettiness too with the use of solar water features. By using a solar powered water feature you can say good bye to the hassle of wires (one of Mr Green’s personal bugbears) and it means you can put a water feature anywhere you want as long as it gets access to enough light.

You might remember when I stated my Green goals for 2013 I mentioned we were getting more chickens. We’ll they’ve arrived! I’m now proud mama to four Sussex Lights which are happily settling into an old shed. Chickens also love a few slugs for dinner AND they’ll eat scraps then reward me with eggs. What’s not to love?

What about you? Any plans to make your gardening even more sustainable?