How baking a cake can change the world 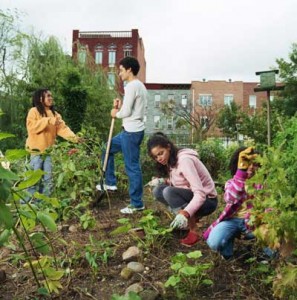 Rob Hopkins has long been someone I admire so I was thrilled to discover his vision was at the centre of this week’s “Change the World Wednesday” challenge.

Small Footprints asked us to consider how we might make change in our own community after watching Rob’s insightful TED Talk which you’ll see at the end of this post.

In the talk, Rob outlines the success of Transition Totnes; a town about 3 hours away from where I live.

Totnes has a higher than average number of families relying on part time work instead of full time work and has 50% more than the national average of families living on less than £20,000. But it is by no means a poor or deprived town. Totnes is a Transition Town, which has harnessed and engaged the collective genius of its people to do something about our current economic situation, peak oil and climate change.

The people of Totnes are supporting local food, local energy companies and using local currencies to attain their vision.

They’ve planted nut trees and enjoyed their first almond harvest. They’ve created the Totnes pound which is not worth anything outside the local economy. They’ve created a local food directory so people can identify and support local growers. And they continue to raise awareness through eco homes and open gardens. In addition they share resources and land; with Garden Share they match people with spare land to people who want to grow on it.

Rob identified that every year the area spends £30 million on food; £20 million of which goes out of the local economy through 2 supermarkets. He determined that if you could shift just 10% of that spend to local food, you could bring £2 million pounds into the economy without the need for government grants or big businesses. That money could be used to create skills training, new livelihoods and enterprises.

What I loved most about the talk was his description of ‘Transition Streets’. The idea is that change works better if you work alongside your neighbours. With Transition Streets you get 6-10 households to meet together every so often and tackle a different area of lifestyle such as food, energy and water; then they make pledges about what they will do. Most households cut 1.6 tonnes from their carbon footprint and save £500 per year. Just imagine what happens if you can eventually get the whole town on board!

What touched me most was the benefits people felt they had from the transition street experience. They didn’t list peak oil or climate change near the top; the top three benefits were community, neighbours and getting to know people. This comes back to something I wrote many years ago and still feel is true; loneliness is the biggest problem in our society and if we can solve that, everything else could fall into place.

I find stories like this so inspiring, but I know my weaknesses. It’s easy for me to get fired up and say I’ll start a ‘Transition Street’ in my own village with my neighbours, but the reality is, I probably won’t. I’m already involved in a time Bank but there ARE a couple more things I’ve been meaning to do – joining a local LETS scheme, finding out about a seed swap meeting I heard about and going to one of our local Transition Town meetings.

But there is one thing I’ll absolutely do. I heard yesterday that one of our neighbours was black and blue after a ceiling collapsed on her. So I’ll bake her a cake, take it over and spend time keeping her company. From these simple acts of care we can rebuild community don’t you think?

I’d love to hear how you feel you could positively impact your community this week.