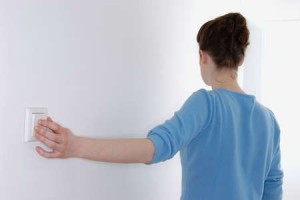 For today’s challenge to lessen our impact of global warming we’ve been asked to turn off one light in the house.

The action from the Ecumenical Lenten Carbon Fast reads “Remove one light bulb from your home. Live without it for the rest of this “carbon fast”. This will decrease energy use and act as a reminder of why we are doing this. In addition, make a point of turning off lights when you leave a room or that you don’t really need to have on. This simple act could save 55 lbs of CO2 emissions a year”
This is very timely because of something that happened the other night. I could hear little Miss Green shuffling around and talking (as she is prone to do in a deep sleep) and went downstairs to discover the shower room light (which we keep on at night time for her) had stopped working. LMG was sitting up in bed fast asleep with her curtains open and light on!

I put a different light on, settled her down, went back to bed and thought no more of it…

As I mentioned yesterday, we’ve started using an Onzo electricity monitor. We discovered that despite turning everything off in the house there was still 20 watts of electricity being used showing on the meter.

With secret agent hats on we went into every room in the house to look for the energy vampire. We couldn’t find anything. We checked the woodshed and garage and still there was nothing. Not a charger or small-powered appliance to be found.

In the end we discovered that the light in the shower room, even though the light bulb was no longer working, was pulling 20 watts of power for the transformer when left in the ‘on’ position. How about that?!

The bulb was an LED bulb which meant the transformer was using more power than the bulb itself!

For this challenge I won’t be turning an extra light off in the house. We keep things to a bare minimum and the downstairs lights are LEDs running from solar panels. To turn off a low powered light at night time would be too stressful for Little Miss green. We will, however, be replacing the shower room light fixture to one that doesn’t have a transformer in it and will be keeping an eye on any lights that are left on unecessarily – one in particular is my office desk light; it’s not unusual for me to walk out of the room and leave it on.

And while we’re on the subject of lighting, I know many people are told as a first, simple step into ‘going green’ that changing incandescent bulbs for CFLs is the way to go. I do not agree with this at all and see CFLs an elastoplast on a wound that needs stitching.

I’m concerned about the levels of mercury in CFLs – not just the odd bulb here or there, but the collective impact of all those bulbs that will eventually end up landfilled. Yes we’re supposed to recycle them, but many people won’t and once they are crushed and releasing mercury into the air, water and land, then what?

If you want to take a first step into ‘going green’ then I would urge you to swap an incandescent for an LED bulb. They cost more to buy but are much cheaper and safer in the long run. Chances are an LED bulb will still be going once your lights have gone out 😉

Is there a light in your home you could safely turn off to reduce your carbon footprint?