Defrost your freezer to reduce your carbon footprint 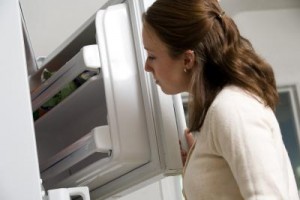 For day 22 of our carbon fast we were asked to defrost our freezer.

The suggestion reads “Defrost your freezer to reduce ice buildup and maintain efficiency. Allowing space for air to circulate will also help it run more efficiently. Place jugs of water in your fridge to help retain cold temperatures and scrub down the coils on the back of your fridge for higher efficiency.”

Ok, well here’s where we’ve taken things a step further. For the past 4 months we’ve not HAD a freezer! I was fed up of paying to store ice, a few fishfingers, some frozen peas and several UFOs (unidentified frozen objects). I figured a tin of fish would suffice for a ‘conveneince’ meal and fresh peas taste much better.

So we’ve been without one. Initially it was an experiment to see if we missed it. Little Miss Green misses oven chips, but it’s nothing an occassional trip to the takeaway doesn’t put right.

I was lousy at defrosting the thing because it’s such a horrible job. So it got worse and worseiuntil there was so much ice the seals didn’t work properly. I know, terrible isn’t it? Apparently the ice that builds up becomes an insulator, reducing the effectiveness of the freezing process. By defrosting the ice, you allow your freezer to operate more efficiently. I also discovered that UK households spend £1.2 billion worth of electricity every year, just on refrigeration and freezing.

Rewinn, I’m pleased to say, is more organised than me. He goes so far as to store bottles of water in his freezer which improves the efficiency, keeps food frozen for longer in the event of a power cut AND provides him with instant icepakcs should an impromtu picnic strike!

When it comes to a glut of gorgeous runner beans from the garden I shall probably regret ditching the freezer. But I think I’ll bag one from Freecycle for a a few months then offer it back once all my goodies have gone.

Is it time for you to step away from the computer and defrost your freezer? If you can see more than 1cms thickness ice around the inside or crystals forming on packages, then I’m afraid the answer is yes.