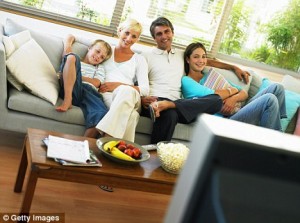 Last week I vowed to work on the following four areas of reducing our electricity usage:

During the week I’ve noticed four other areas for improvement which I’ve put into action straight away:

I’m first up in the mornings. As a treat for Mr Green, who you can’t talk to unless he’s had his coffee, I switch the kettle on. When he gets up he switches the kettle on again before going into the bathroom.

I figured my initial warm up was,in fact, wasteful (especially as the first kettle of the day is a full one). I’m still doing ‘my bit’ to make the mornings run smoother by filling the kettle, but I’m no longer turning it on for a pre-warm.

Mr Green and I are exceptionally bad with the router. If we go out during the day we leave everything on, including laptops and desk tops. It’s a convenience thing – I mean, who wants to wait a whole three minutes or so for everything to warm up again when you get back in? I know, laughable isn’t it? Time is so precious that we would rather waste electricity than spend 3 minutes meditating while our 21st century clicks and whirrs into life.

The other thing is I’m using the tankless water heater a lot. I have to confess I often wash up under running warm water rather than filling the bowl; which is a big eco sin to own up to as this wastes water as well as electricity. So this is something I really need to look at improving.

Last week I cooked jacket potatoes on four days. These take 1 1/2 hours in the oven and are pretty energy intensive. Wherever I can I fill the oven with other things but with a family of three I don’t need to do that much baking! This week I only ate jacket potatoes twice and boiled them the rest of the time.

Regarding my initial 4 areas of improvement, I’ve been a bit chicken when it’s come to the heater. I HAVE worn more clothes, but I’ve also used the heater in the bedroom at night-time – it’s just SO cold, even with a hot water bottle and feather duvet for that first half hour or so. I can work on this however, and toughen up over the next few weeks!

We’ve been excellent with turning off the router and computers at night time since we bought our new remote control. Not a night has gone with everything left on – yay!

Turning the lights off has been difficult. Honestly I would spend all evening walking around the house and checking things to keep on top of it fully. I don’t know why we find it so difficult, but it would appear we do. At least most of them are LEDs so I don’t feel too bad. I just went downstairs to get the figures for this post and turned off SIX lights!!

Closing the curtains at night we have done, so that’s another plus.

Our reading reduced from 102 the first week to 93 the second; which means we’ve reduced our usage by 9 Kwhs. I AM pleased BUT as you’ll see from my chart helow I only used the dehydrator twice (I injured my hand so couldn’t hold a knife safely to peel and chop the apples!) compared to five times last week, so I’m not sure how much reduction was due to the changes we made.

For this week I’m going to focus on using the wood burner much more for heating things on – this will make a difference to the amount of electricity we use for cooking.

What about you – have you managed to reduce your electricity consumption? What have you found makes the biggest difference in your household? 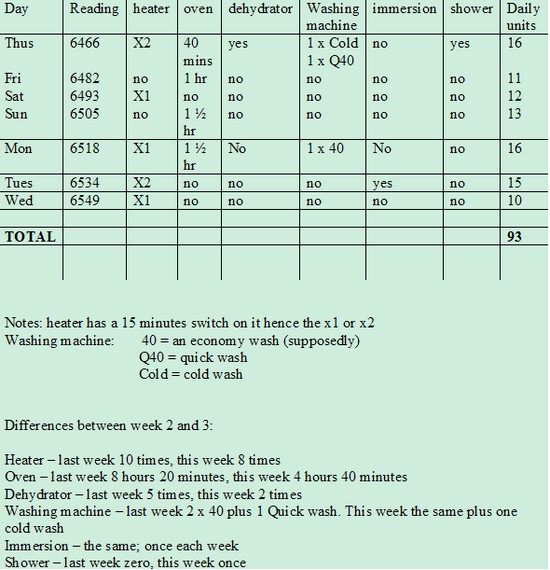