The changing face of energy consumption 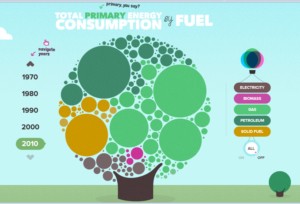 Reducing our energy use is a global issue, but much of what we can do as individuals starts in the home.

Households in the UK have made great strides towards improving their energy-efficiency through a variety of measures over the last few decades, yet overall energy consumption keeps rising as the population grows and society increasingly depends on electronic gadgets.

There’s no denying that energy prices are rising all the time – the average household is now spending almost twice as much on electricity bills as it did in 1990, and nearly three times as much for gas.

This is partly because of the changing nature of energy consumption, as illustrated by a recent infographic from solar panel company EvoEnergy. Using figures obtained from the Department of Energy and Climate Change, the graphic illustrates the huge shift the UK has made from solid fuel to gas in the last 40 years.

In the 1970s, the UK’s energy consumption was split more or less between petrol and solid fuel at 44 per cent and 47 per cent respectively, with gas making up just a tiny five per cent.

In the 1980s, gas consumption crept up to 22 per cent of total consumption and solid waned to just 36 per cent – no doubt partly motivated by the decline of the UK’s domestic coal mining industry, which pushed up the price of solid fuel.

By 2010, the country’s energy consumption stood at 43 per cent gas, 32 per cent petrol and just 15 per cent solid fuel. This growing dependence on gas – the price of which is heavily tied to the value of crude oil – has led to the skyrocketing prices we have seen in the bills we get through our letterboxes.

However, the EvoEnergy infographic did show a few seeds of hope. In the 2000s, biomass showed up for the first time, accounting for one per cent of the UK’s energy consumption. By 2010, this had grown to three per cent – almost the same amount gas accounted for in the 1970s. Biomass is a renewable source of energy that produces a fraction of the CO2 emissions of fossil fuels, and can be sourced locally rather than imported to further reduce its impact on the environment.

Currently biomass production is considered too expensive for large-scale commercial viability, though our dwindling supply of fossil fuels may see it accounting for larger and larger slices of the energy consumption pie in future.