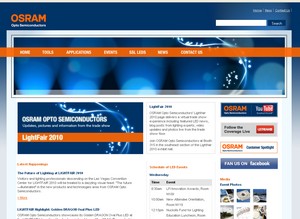 As you know, Mr Green and I are great fans of LED lighting. We’ve installed LEDs for the downstairs of our home and they are running from a small solar panel.

I was excited to hear about OSRAM Opto-Semiconductors (OSRAM-OS) latest venture. The company make LED’s for a variety of uses and they are exhibiting at LightFair 2010; a lighting trade show, which takes place May 12 – 14 in Las Vegas.

What if you can’t make it to Las Vegas?

OSRAM-OS have the answer with their Virtual TradeShow; a new section of its LED Light site dedicated to LIGHTFAIR International 2010.

So if you’re interested in LED Lighting but don’t live near LightFair, you can attend LightFair 2010 virtually and get a good idea of what is happening.

This Virtual Trade Show site is a fantastic example of the LED industry embracing social media, and using it to communicate and engage with it’s audience. It enables customer interaction both at the event and around the world.

The virtual trade show page will include continuously updated content as the company prepares for the event, and live updates from the OSRAM Opto Semiconductors’ display at Booth 315 at LIGHTFAIR.

More than 19,000 design, lighting, architectural, and engineering professionals are expected to attend LIGHTFAIR International and there will be 70 courses on offer, covering all areas of lighting technology.