As you might be aware, we’ve been reviewing an Onzo electricity monitor. We’ve been taking part in a ‘carbon fast’ as suggested by Reduce Footprints and as it happened, this monitor had arrived the day before.

Reducing our electricity consumption is something Mr green and I have been talking about again! and this has been the perfect excuse and motivation to get started.

For some reason allowing our electricity usage to creep up is something we keep doing. Old habits die hard it would seem.

I’m going to do 4 reviews on the Onzo. Today’s will be my initial thoughts from when the Onzo monitor arrived to setting it up. Next weeks review will be about ‘living with an Onzo monitor’ and I’ll tell you how easy, effective and useful the unit is. The third review will be about syncing the device to your computer and the last one will be a review of how much energy we have saved (or not!)

The monitor arrived on a Tuesday morning so we decided to have a ‘normal’ week to see how much we can save by making small changes to our lifestyle.

Just so you can create a picture in your mind; at Chez Green we do not have gas. We use electricity for cooking, back up heating and the immersion tank. We have a woodburner for heat and it will heat the water, but I pop an electric heater on in our bedroom each night and if I work upstairs during the day I use a convector heater. We run LED light bulbs downstairs which use solar. During the summer when the woodburner is not being used, we have to heat water with electricity. What this often means is our electricity consumption is pretty much the same throughout the year. During the winter we cook more but get ‘free’ hot water most of the time, and in the summer we need to use electricity for water but cook less.

Here are my initial thoughts with setting the Onzo monitor up. As well as something that helps reduce energy consumption and therefore my carbon footprint, I look at other features such as materials used for the product and packaging along with any other eco friendly features. 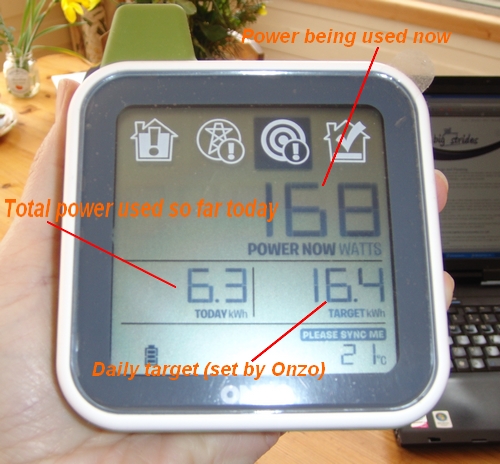 Great packaging – the Onzo arrives in a slick cardboard box with a small amount of polythene; all of which can be recycled.

Battery. The unit comes with a recyclable battery which is easily charged. This is a fantastic feature as we have used energy monitors before which have eaten disposable batteries.

Display. The display tells you everything you want to know – either power usage or running cost. You don’t need anything else and this has been well thought out to make it easy to toggle between both displays.

Interactive. The monitor gives you a daily target based on your average usage. This adds real incentive to using the monitor.

Tracking. The Onzo tracks your electricity consumption by the second. Some monitors take a while to ‘see’ that you have turned the kettle or shower on, but with Onzo, it’s instant.

The display is extremely good quality and very durable, it’s almost like a big child’s toy! Silica Gel. A sachet of silica gel will end up landfilled unless I reuse it.

Wall charger. We couldn’t find the wall charger anywhere and I realised it was still in the outer box. I can seriously imagine some people throwing it away by accident. The packaging is wonderful but there is nowhere for the charger to sit which seems an oversight.

Ease of setting up. If you take a moment to look something up when you’re setting the monitor up, it goes back to the beginning. This means, if you look for your unit charge and take too long finding it, you have to scroll through the currency charge, date and time AGAIN before being able to enter the unit charge. This is just plain frustrating.

Estimating averages. I have two charges on my tariff. The first 85 Kwhs per quarter at once price and the rest of my usage is at another, lower price. There is no way to account for this with the monitor, so I had to guess at my unit price by estimating an average.

Back of display. The back of the display doesn’t stay on properly. It’s fine for us with an older child, but wouldn’t be good for a family with young children as they would have access to the battery and display controls.

Setting buttons. Oh man, the setting buttons are So hard to use. I thought of my friend Gennie who has arthritis and there is no way she would be able to use them. I ended up with a really sore finger after setting everything – I sound a wuss, but it really did hurt! I understand you don’t want to be able to accidentally change a setting, but really, these were too hard to push.

Set to zero. The standing charge is set to £20. Mine is zero and I had to scroll through *in pennies* to set it to zero – a ‘set to zero’ button would be a huge help.

I’ve now set up three different energy monitors and the Onzo does have much clearer and easy-to-follow instructions. You’re told what you will need beforehand (access to old bills and current tariff) and are talked through each step. Apart from a few blips it was pretty straightforward. The packaging is excellent and they’ve paid attention to using boxes which will fit through a standard letterbox which means if you’re out when it is delivered, you’ll find it waiting for you when you get home – no having to queue at the post office for your ‘undelivered’ item. The display looks very durable and should withstand a few knocks.

My main concern is with how difficult it is to press the setting buttons and the omission of a simple function such as ‘set to zero’.