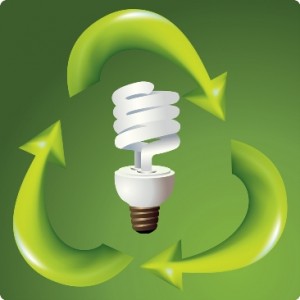 For day 45 it was all about low energy bulbs.

The advice read “Replace the light bulb you removed at the start of the Carbon Fast, but only after considering whether you really need it. If you do, replace it with a compact fluorescent lamp (CFL), which can save 150 lbs. of carbon dioxide a year. And since the book of Romans tells us that “Love does no harm to its neighbor”, why not help someone else cut their emissions by giving them a CFL as a gift as well?”

Here’s something I won’t be doing, not because I don’t need a replacement bulb but because I feel the need to speak out about CFLs.

To me, the CFL is a prime example of the eco friendly Emperors new clothes.

Most people change from incandescent bulbs to CFLs as one of the first steps of their eco friendly journey. I did the same but I was soon dis-enamoured. not only could I not bear the yellowy tinge to the light but I started to get headaches and dizziness.

After a few months I read some research which, like all research showed ‘evidence’ both for and against this speculation. Then I saw further stories about a link between CFls and skin cancer.

Next I got concerned about the levels of mercury in CFL bulbs – a tiny amount I’ll grant you but when all those bulbs finally run out and are disposed of, how much mercury will we collectively release into the earth and air?
Mr green had a CFL shatter on him and we discovered advice was to vacate the room for 15 minutes, wear gloves, put the bulb in a plastic bag, seal it and dispose of it safely. Most people, however, sweep everything up and toss it in the trash.

Now cigarettes carry a huge ‘Smoking kills’ warning on the packet and I’d like to be radical and suggest we have something similar on CFL bulbs about the mercury content because the latest story is that scientists have found energy saving bulbs release cancer causing chemicals.  The advice is that CFLs should not be left on for long periods of time or placed close to a person’s head because they release poisonous materials. That rules out your eco friendly reading light then…

If I can’t make up my mind about something then I usually look to nature for the answers. By observing animals you can usually detect what is going on. According to Mercola some consumers complain that their pets react adversely to CFL bulbs such as dogs barking at the ceiling and becoming increasingly agitated in rooms containing CFLs. Some believe these bulbs produce an ultrasonic noise that disturbs animals.

Oh yes, to top it all off, CFLs gradually dim as they wear out, but they can also finally give a ‘pop’ and give off an odour as well as smoke – I wonder what that smoke is as the bulb draws its final breath?

And that, my friends, is why I shall be sticking to my incandescents with a dimmer switch and gradually replacing the whole house to solar powered LEDs. It’s also why I most certainly will NOT be gifting my loved ones a CFL.

How many CFLs do you have in your home?