One unexpected benefit to driving an electric car

July 4, 2012 | Mrs Green | Comments Off on One unexpected benefit to driving an electric car | Travel and Transport 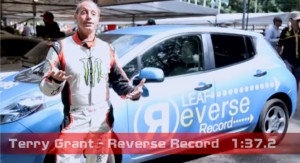 Last weekend amidst all the British rain, Nissan decided to bring some fun and sunshine into our lives with a crazy stunt…

They attempted to set the Guinness World Speed Record for the fastest time over a distance of one mile in reverse, with their 100% electric, Nissan LEAF.

And they did it!The Nissan LEAF did indeed set the world record for the fastest car over a measured mile in reverse!

Driven by professional stunt driver, Terry Grant, the Nissan LEAF raced backwards up the famous Goodwood hillclimb course at the Festival of Speed, covering the distance in 1m 37.02s at an average speed of 88.5km/h.

After setting an initial record on Friday, Terry then broke it 5 times.

The car has no gear box, which means it can go as fast in reverse as it can forwards, and it’s low centre of gravity meant he could reverse around the tight corners, without rolling the car.

The stunt was part of a wider social media campaign, highlighting the benefits of driving electric cars; although I’m not convinced being able to drive as quickly backwards as you can forwards is of huge benefit, unless you’re planning on being the next James Bond 😉

For more information, visit The Big Turn On.