All aboard the electric bus! 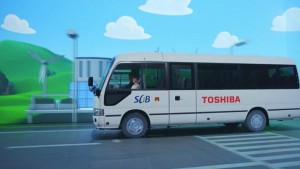 What vehicle costs 70% less to run than diesel?

And which same vehicle produces 60% less CO2 emissions than a diesel one?

This week I came across something rather exciting!

As you know, my 4×4 is something that causes me a bit of eco guilt.

With only 25 miles to the gallon, it’s not exactly the greenest way to get around.

We looked at an electric car, (and lusted after one of these) but living in a rural area, we were a bit worried about getting stranded.

When we were looking at them, they only had a range of 100 miles, no back up power supply and they took an age to recharge.

Without any nearby recharging stations, it felt too big a risk to take…And I can’t imagine the AA man carrying around a spare battery with him, like he can carry a gallon of fuel.

But I’m an optimist and I know things are changing for the better all the time.

For example when I started recycling, there was nowhere to recycle Tetra Pak juice cartons.

Mine went in the bin.

But I kept checking their online recycling locator and discovered, eventually, that a recycling facility was available just three miles away!

And think about mobile phones! My first one was the size (and almost weight) of a house brick! You could send and receive phonecalls and text messages, but that was it. Now we can carry around a small computer in our pockets.
I’m confident it will be the same way with the future of transport.

Which is why I wanted to share a story with you about one of Toshiba’s “Smart Community” innovations – the electric bus!

Toshiba are on a mission to improve the energy management of cities for a safer and more comfortable society. As stated at the beginning of this article, these buses cost 70% less to run and produce 60% less CO2 emissions than a diesel bus!

Now I don’t know about you, but I dread it when we pull out behind a bus – the smell of the fumes makes me feel sick after a few moments and I can taste it in the back of my throat for ages. Imagine a world where we can all hop on a bus and still breathe clean air; wouldn’t that feel good…

The new electric buses that Toshiba are working on in their Fuchu facility, use Toshiba’s SCiB™ secondary battery that is capable of quick recharging.

They’ve also installed satellite GPS that uses the new Quasi-Zenith Satellite System (QZSS) in Japan. This system greatly enhances positioning accuracy by means of a satellite directly overhead (at the zenith), so it can locate a vehicle without disrupted transmission from mountains or buildings.

Check out this video to see their vision of how electric buses can transform a city. Toshiba believe the demand for electric buses will grow on a global scale and that they are part of the answer in improving the sustainability of the world we share.

What do you think – is an electric bus the future of public transport?