Is Hydrogen fuel the future of motoring?

March 2, 2015 | Mrs Green | Comments Off on Is Hydrogen fuel the future of motoring? | Travel and Transport 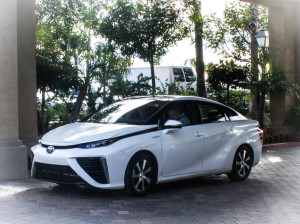 As you know, I like to keep my eye on the car market.

While we still drive a 4×4 which gives us a rather eco-UN friendly 25 miles to the gallon, I hold out hope that one day we’ll be able to purchase something that ticks all the sustainable boxes.

I’m still unsure about electric cars because they have such a short range. And living in a rural location where we do; without many recharging points; I’d worry about getting stranded.

A car that has grabbed my attention recently is the Toyota Mirai. I first came across this vehicle on LV’s blog “Most anticipated cars of 2015“.

Astoundingly, Toyota began fuel cell development back in the early 90s and they’ve finally unveiled a vehicle which takes just 4 minutes to refuel and has a range of up to 300 miles on a full tank. That feels much more realistic; don’t you think?

Following Japan and the US, the UK is one of the first markets in the world where it will be sold – we’re due to see them in September and I can’t wait!

On the emissions front, the hydrogen fuel cell car works by harnessing power from the chemical reaction between hydrogen and oxygen, with the only emission being water; so the planet can certainly breathe more easily.

It’s quite a looker too. I mean, would you say no to this on your driveway?

What do you think – is hydrogen fuel the future of cars?