May 1, 2014 | Mrs Green | Comments Off on Necker Island – @richardbranson experiment in sustainable living | Travel and Transport 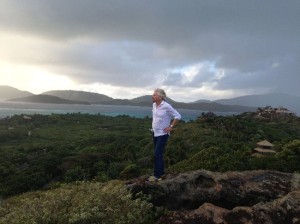 I’m not much of a holiday person, being a girl who loves her countryside home.

In fact, I regularly joke that people PAY MONEY to come and stay in the very area I live!
But one place that has always intrigued me has been Richard Branson’s Necker Island.

I first came across it in a previous existence when I used to regularly indulge in “Hello” magazine.

And I fell in love with it at first sight.

In case you’re out of the loop Necker Island is a 74-acre island in the British Virgin Islands.

Owned by Sir Richard Branson, the entire island operates like a resort and can accommodate up to 40 guests in four houses.

After seeing the uninhabited Necker Island in the late 1970’s -and being stunned by the view and wildlife – Branson fell in love with the island.

Unlike me, he had the budget to buy it; ready to turn it into a luxury resort.

But it does include staff 😉

His original plan was to turn it into a recording studio, but instead he decided to offer it as a place where people could meet, debate, think, conceive ideas, get away from it all, relax and have a good time.

And with the environment at the heart of this development, the island is a haven for endangered species as well as being an experiment in sustainable living.

The Carbon War Room was conceived on the island – an organisation that works with industry to extract carbon out of the earth’s atmosphere.

He’s reintroduced species onto Necker that used to exist on the Virgin Islands and in a few months the island will be almost carbon neutral.

This will be achieved by installing windmills and more solar panels.

The aim is to show the British Virgin Islands Government and other Caribbean Governments that by turning to clean energy you can save on your electricity bill AND put less carbon into the earth’s atmosphere.

Watch this inspiring and personal video “My story of Necker Island” and read more about the story on Richard’s blog.

This post is sponsored, although sadly I wasn’t invited for a fortnight’s holiday – I might just have broken my own rule of ‘no long haul flights’ for that one 😉