How to treat a fever with natural remedies

August 18, 2008 | Mrs Green | Comments Off on How to treat a fever with natural remedies | Common ailments 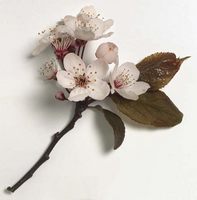 Well the Universe has been testing me for a week now! Little Miss Green fell down the stairs a couple of nights ago (out came the arnica) and then ran a fever last night.

Personally, I think it was some kind of delayed shock, but then a few of our neighbours seem to be suffering a nasty fever / headache / cold.

So what is a green mama to do when her little bear club is feverish at 3 o’clock in the morning?

1- temperature control
Well, the first thing is to take their temperature so that you know what you’re dealing with. Little Miss Green’s was 39. High, but safe enough for her body to cope with.

2- Rescue Remedy, mama love and empowering stories
She was quite tearful and kept saying ‘I wish I felt better’ so I gave her some rescue remedy, made up a story about a poorly frog who soon got better and issued lots of hugs. I let her sleep in my room and held her hand while she drifted in and out of sleep.

Never underestimate the power of a story with positive messages; they can be amazing healers in themselves.

3- Yarrow
When she woke up an hour later and her temperature was still rising, I made her some yarrow tea. Yarrow is wonderful for breaking a fever. It pushes up the temperature and lets you sweat it out. This is the opposite of over the counter medications which arrest the fever and bring your body temperature down.

If your child is not used to the taste, you can put some fruit juice concentrate or a teaspoon of honey in with it and get them to sip it.

4- Fluids
This is the time to pull out all the stops – favourite cups, straws, off a teaspoon, slurped off a plate – if a child has a fever just do whatever it takes to get them to drink plenty of fluid.

Let them drink from the cats bowl if they want to (cleaned first of course 😉 ). Anything, to get them to drink and replace lost fluids. Choose water or herbal teas in preference to squash or fizzy soda drinks.

5- Cherry Plum
After the tea and a dose of cherry plum flower remedy she dosed again. Cherry Plum is great for any childhood illness that involves a fever and helps the body-mind to ‘let go’. Little Miss Green can get quite ‘tight’ when she is ill. She is so energetic most of the time, that being ill is met with a lot of resentment, resistance and anger in her.

Giving the Cherry plum brings with it a renewed sense of okness and allows her to accept the process.

6- Cool sponging
Later on, the yarrow had worked its magic and the fever broke. She woke up crying that ‘the room looks weird’, Oh bless her; I get this too – the ceiling feels as if it is caving in on me and there are black specks everywhere. She was trying to push things away that weren’t really there and her temperature was still increasing.

This time I went for cool sponging. I put a drop of lavender and lemon essential oil on a cloth and wrung it out in cool (not cold) water. I sponged her face and head and she was asleep again in 5 minutes. The lavender is soothing and calming and lemon is antiseptic.

7- essential oils
I also rubbed lavender and tea tree oils, diluted in a little grapeseed oil into her feet while she slept. Putting oils onto the feet gets them into the body quickly and provides a soothing massage at the same time (especially for my little Pisces, who loves having her feet rubbed!)

The next thing she did was get up 8:30 this morning with a smile on her face.

Today her temperature is back to normal and she’s had a wonderful ‘creative’ day making things with glitter and glue. She has eaten very little, just some apple and mango, but has drunk herbal tea and water throughout the day.

The most important thing with nursing a fever is your sense of trust. We have been taught to fear them with images of convulsions and permanent brain damage if we do not intervene. Yes, it can happen, but so can being run over when we cross the road. And we don’t spend our lives living on one side of the neighbourhood.

Conventional medicine will switch the fever off with the use of drugs. Holistic medicine supports the body through a fever and allows the fever to do its job. A fever is designed to ‘burn up’ toxins, bacteria, viruses and expel the toxins through sweating.

It’s up to you how far you feel confident to ‘push’ the fever; trust your own intuition and listen to your heart. Don’t give into fear and learn to hear the difference between the voice of wisdom and the voice of fear 😉