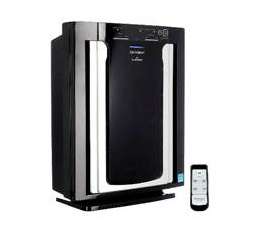 The EPA reckon that indoor air pollution may be worse than outdoor pollution.

There are many reasons for this including double glazing and insulation; which prevent air flow, toxic chemicals used in decor and furniture, wall-to-wall carpets treated with chemicals and electromagnetic pollution from electronic computers and gadgets.

According to Electrolux, we breathe more than 10 000 litres of air every day, so let’s make it air that is free from pollutants and allergens!

The Electrolux Oxygen removes 99.97% of hazardous particles as small as 0.3 microns. That’s particles up to 150 times thinner than an average human hair.

This includes most of the main irritants and asthma triggers, such as mould, pollen, airborne allergens from pets and dust mites as well as tobacco smoke.

The Oxygen is equipped with an odour sensor. This is an electronic ‘nose’ that increases airflow when it detects certain smells like solvents, exhaust fumes, cigarette smoke and other hazardous gases, which are absorbed by the active carbon filters.

If you can’t stretch to an oxygen air cleaner, then why not try a houseplant? Reserach by NASA shows that nature can help us reduce indoor air pollution too! Follow this link to find out more!

What about you? Will you be investing in an air cleaner, sticking with house plants, opening a window or do you think indoor air pollution is a figment of the imagination?