Pangea Day taps the power of film to strengthen tolerance and compassion while uniting millions of people to build a better future. It’s aim is to reunite the people of the world through the power of music and video. For example, in one you’ll see a choir from the USA singing the Mexican anthem along the fence that divides the US from Mexico.

In a world where people are often divided by borders, difference, and conflict, it’s easy to lose sight of what we all have in common. Pangea Day seeks to overcome that — to help people see themselves in others — through the power of film.

On May 10, 2008 — Pangea Day — sites in Cairo, Kigali, London, Los Angeles, Mumbai, and Rio de Janeiro will be linked live to produce a program of powerful films, visionary speakers, and uplifting music. 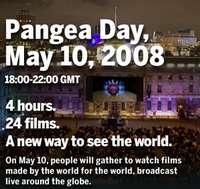 Of course, movies alone can’t change the world. But the people who watch them can. So following May 10, 2008, Pangea Day organisers will facilitate community-building activities around the world by connecting inspired viewers with numerous organisations that are already doing groundbreaking work.

You can watch live online, from their website, on TV, at movie theatres around the world, on your mobile phone or by attending a live event at one of the six cities in the world mentioned above. There are also details of their facebook, MySpace and YouTube groups on their site.

It makes me feel nostalgic for the days when my hormones were out of control by watching David Bowie at Live Aid. People all around the world looking for positivity, meaning and change in the world.