What did you feed your child for lunch today? Something healthy and nutritious? Something quick out of a packet? Something nuked in the microwave? Chips again because it is the only thing they will eat? Did they ask for chocolate or sweets afterwards or a piece of fruit?

Little Miss Green was breast fed for two years and then she weaned herself. Her first foods were home cooked, mainly homegrown, fresh, seasonal and organic. We made a conscious decision not to give her refined sugar, too much wheat, cows dairy or anything else that we consume too much of in this country. We went for a balance of ‘moderation in all things’ as we believed this would best support her health.

When she went to school she was exposed to school dinners and other children’s lunch boxes. Next to her rice cakes, fresh fruit and organic juice were white bread sandwiches with plastic ham filling, sweets, chocolate and fizzy drinks. She wanted to try these things and became more and more ‘fussy’ about what she would eat.

I found it very hard to deal with, but had to simply trust, by looking at her health and happiness that she was still healthy despite stopping eating fruit and vegetables and living on a diet of rice cakes, marmite, crisps and porrage.

I used to worry about it, used to try and think up creative ways to encourage her to eat a wider variety of foods. I would spend ages in the kitchen making nutritious and tasty meals for her to try. I tried not to make an issue of is, but no doubt I did somewhere along the line. 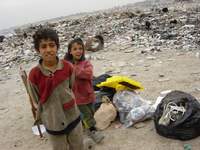 Today, a few years on, Little Miss Green’s diet is more balanced again. She still likes her chocolate, squash and other goodies that she gets fed at other people’s houses, but I’m happy overall with her food choices at home and her health still reflects this.

This afternoon as I made lunch I couldn’t see for the tears streaming down my face. Everything I had gone through with Little Miss Green and her diet was put slap bang into perspective by news of the food riots across the world. I was thinking about one father in Haiti whose children ate two spoonfuls of rice each as their only meal recently and then went without any food the following day.

I thought too of the destitute people that are forced to eat patties made from mud, oil and sugar. One 24 year old man says “It’s salty and it has butter and you don’t know you’re eating dirt. It makes your stomach quiet down.”

The my thoughts turned to Elta Petithomme, who has been scouring the Haitian capital’s garbage-strewn main market street for hours, searching for something to feed her four young children.

And if that’s not too much to bear my heart finally cracked open when I thought of 29 year old Placide Simone who offered one of her five offspring to a stranger. “Take one,” she said, cradling a listless baby and motioning toward four rail-thin toddlers, none of whom had eaten that day. “You pick. Just feed them.”

In the UK we throw away, on average one third of the food we buy every week. How can we do this with a conscience if we hold for a moment, the image of these people, forced to eat mud and give away their own children for a better quality of life?

The news is rife with stories of food shortages and riots. I don’t pretend to know much about it, know how to do anything about it or understand the politics behind it, but as far as I can make out, there are five contributing factors:

1- Soaring food prices as a knock on effect of increased oil prices.

2- Increased burden on the earth’s resources for food due to population increase.

3- An increased proportion of crops being grown for biofuel instead of feeding the people who need them. That, surely, is total insanity and completely immoral.

4- Effects of global warming, such as droughts causing crop failure. Australia’s rice production has fallen my 98% after six years of drought.

5- Food profiteering. This parasitical and barbaric trade is still being allowed to continue.

As I said, I don’t know alot of about speculative purchases or the politics behind it, but if you feel angered, upset, sickened, moved or frustrated by what is going on (and I sincerely hope you do) in the world, hop over to Little Blog in the Big woods for an excellent resume of the situation, lots of links for further reading and most importantly, guidelines for what you can DO.

This guy is trying to start a movement. A movement of people who want to make positive changes in the world. Many of these people who are starving are too weak for activism, so they are relying on us to do it for them.

Hold the image of Placide Simone in your heart for a moment and ask yourself if you are one of them……….