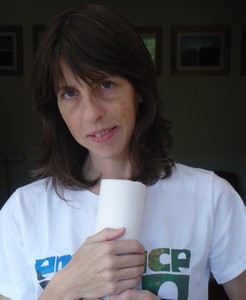 This is the second time we’ve taken part and this week is a very timely challenge for me. I think some of the participants might have been spying on me!

Over on Reduce Footprints, where the challenge is set each week, we’ve been asked to give up paper kitchen towel. Last week we had to plant something.

Now I have a story to tell you about kitchen towel!
Back in January I gave up paper kitchen towel. I got hold of some microfiber cloths and old rags and planned to usethose instead. Easy right?

You see, I have a touch of OCD (Obsessive Compulsive Disorder); this means lots of hand washing, but in order for me to feel ‘safe’ I need to wipe my hands afterwards in kitchen towel, which is clean and disposable, not something that might have been ‘contaminated’ by something or someone else.

Not rational I know, but fears and compulsions aren’t rational or logical.

Anyway, I managed to go for a long time without using paper kitchen towel and in fact used to shake my hands dry or wipe them in my jeans rather than use cloths which saved on laundry too!

A couple of months ago the cat puked on the floor. This was one of the scenarios for which I kept an emergency secret stash of kitchen towel. Off I went to a brand new pack and started to use it.

The fatal error I made was to leave the roll of kitchen towel on the worksurface rather than put it away again. You can guess the rest of the story.

I’m using nowhere near the amount I used to, but I’m using more than I need to. I use lots more when I’m stressed because the OCD kicks in.

Anyway, here I am, all signed up for this week’s change the world Wednesday and I’m giving it my best shot. I am cuddling my beloved kitchen towel for the last time and I’m now going to put it out of sight and see how I get on.

Things are a bit stressful in my life at the moment, so this will be a challenge on more ways than it might be for other people. But as each person in the UK reportedly gets through 250kg of paper per year I’m going to see how much I can reduce mine by through taking this small(ish) step.

What about you – do you use kitchen towel or have you given it up? Why not take part in Change the World Wednesday yourself?

To find out how some of the participants got on with planting something check out:

Elizabeth at Gaia Tribe (who has reminded me to plant my bulbs for my favourite spring flowers – thank you Elizabeth!)
Argentum Vulgaris at Tomus Arcanum
Squirrel
Inge at Dementia for 2
Rewinn
Harri Pao
Sinclair at Nature with me

How did you get on – did you plant something last week? If not, just catch up this week instead!